The Queer Cineclub organizes a preview of the feature film Soldiers / Soldații. Poveste din Ferentari (directed by Ivana Mladenović, 2017). It is one of the most anticipated Romanian productions of 2018 and one of the few feature films in the history of the Romanian cinema that openly approaches the gay issue. The film is produced by Hi Film Productions and it is based upon the same novel written by Adrian Schiop and published by Polirom Publishing Housw in 2013. 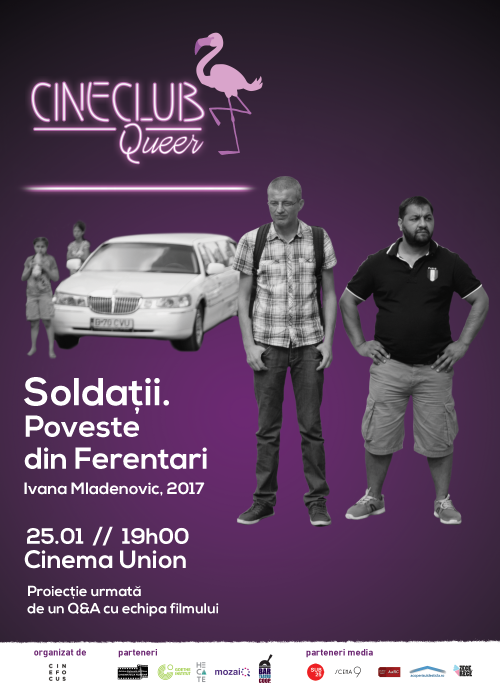 Being selected in international film festivals such as Toronto, San Sebastian and Rotterdam, Soldiers (Soldații. Poveste din Ferentari) tells the story of an anthropologist (Adrian Schiop), who moves to the Ferentari neighborhood in order to study the social field of the manele music and of Alberto (Vasile Pavel Digudai), a man who had spent most of his adult life in prison. Their relationship, equally based on mutual support and exploitation, draws a larger portrait of the economical. social and cultural divisions that define the Romanian society.
The screening will take place on Thursday, January 25th, starting with 7:00 p.m. at the Union Cinematheque and it will be followed by a Q&A with the film crew members.
Starting with February, 2nd, the film will be released in the Romanian cinemas by Micro Film.
Queer Cineclub is a film project that means organizing two film events per month, representing the screening of queer films. By this initiative, the Queer Cineclub intends to bring to the attention of the audience a series of classical LGBTQ+ films from the world cinema (produced until 1990), with the intention of rediscovering and re-discussing a heritage that already existed in the collections of the Film National Archives.
The film poster is made by Radu Pop.
The entrance fee is 10 lei.
The access after the screening started is forbidden.
Details: Facebook