“Ivana the Terrible”, the Romanian Release, on Friday

The feature film Ivana the Terrible / Ivana cea Groaznică, the recent winner of the Best Film Award of the 48th edition of the FEST International Film Festival in Belgrade, will be released in the Romanian cinemas on March 13, 2020. 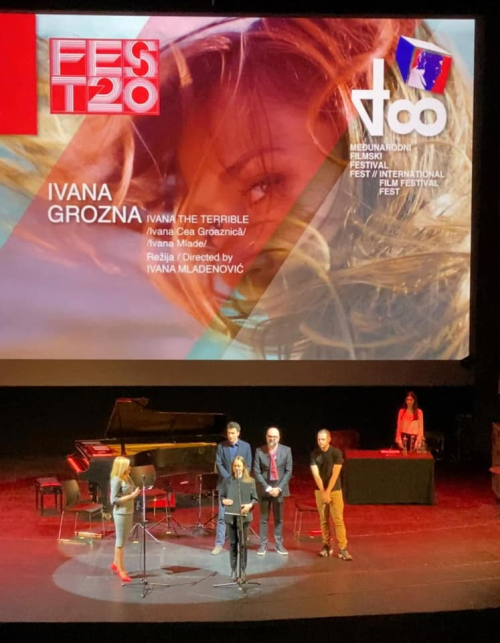 Ivana the Terrible, a Romanian-Serbian production directed by Ivana Mladenović, will be screened in Bucharest (Cinema City AFI Cotroceni, City Park Lake, Hollywood Multiplex, Happy Cinema, „Elvire Popesco” Cinema, Romanian Peasant Museum Cinema, Union Cinema, Europa Cinema), Bârlad (Cityplex Victoria), Botoșani (Cine Globe), Cluj-Napoca (Cinema City Iulius Mall, Cinema Victoria, Cinema Arta), Iași (Cinema Iași), Pitești (Cinema Trivale), Sibiu (Cine Gold), Sfântu Gheorghe (Cityplex Arta), Slobozia (Casa de Cultură), Târgu Mureș (Cinema Arta), Târgu Jiu (Cinema „Sergiu Nicolaescu”), Vaslui (Cityplex).  The feature film will have a preview screening in Cluj-Napoca at the Victoria Cinema at the TIFF Cinematheque on Thursday, March 12, from 20:00 20:00, in the presence of the director Ivana Mladenović and of the  protagonist Andrei Dinescu. Ivana the Terrible will be screened in Brașov, on March 12, from 19:00, at Visssual and from April 2 to 5, the film can be seen at the “Bela Lugosi” Cinema in Lugoj.
At the same time, the film continues its festival journey. The film is included in the CPH:DOX (Denmark, March 18-20, 2020) and Vilnius International Film Festival (Lithuania, March 19 – April 2).
After having received the Special Award of the Jury of the Cineasti del presente section of the 2019 Locarno Film Festival, the production also received the Golden Pram Trophy for the Best Feature Film of the Zagreb Film Festival. The film was presented in more international festivals. The Romanian preview took place during Les Films de Cannes à Bucarest.
This year, the production was also presented in festivals such as Festival Premiers Plans d’Angers (France), Trieste Film Festival (Italy) and Göteborg Film Festival (Sweden).
Ivana the Terrible is a nonconventional story about people and places, about belonging and longing, told with humour and tenderness.
The Serbian actress Ivana works and lives in Romania, but after several health issues, she decides to spend her summer on the other side of the Danube, in Kladovo, her native little town, surrounded by her family.
The mayor invites her to be the image of the most important local event – the music festival Friendship Bridge – and though she is not very convinced, Ivana accepts it. After the arrival of her eccentric friends from Bucharest and as the gossip about her having a younger lover spreads around her town, Ivana arrives on the verge of a nervous breakdown.The family and friends are invited to bring on the screen their own emotions and to play themselves in a film story about a woman who can`t find her place on neither side of the Danube.
Details: Ivana cea Groaznică FB