In December, Cineclub Queer is to screen Flesh (1968), the first title of the trilogy with the same name by Paul Morrissey and one of the first American cinema representation of men sexual exploitation. 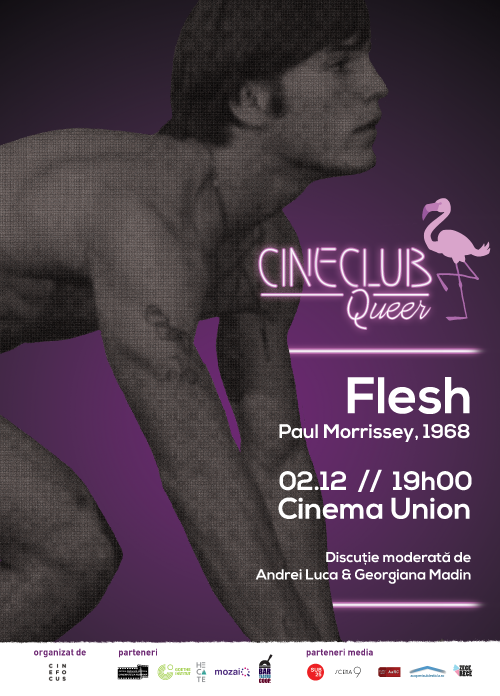 A narrative expansion of the aesthetic themes and formulas approached by Andy Warhol, Flesh follows a day of a hustler's life (Joe Dallesandro), who has to get two hundred dollars. Morrissey introduces the feature's central theme, the voyeurism, through Joe's interactions to men he provides services to, such services varying from emotional exchanges to transactions where the customers deny their homosexuality, associate it with friendship or camouflage it in aestheticism. Through the docility with which Joe plays his parts in every situation, Morrissey develops formally the theme of voyeurism and questions more and more the border between sexual freedom and consumption, taking this trip to its final consequence – the transfer of the exploiting view to the viewer.
The screening will be held on Saturday, 2 December, at 19:00, at Cinematheque Union, and the film will be followed by a talk with film critics Georgiana Madin and Andrei Luca.
Cineclub Queer is a cinema project consisting in setting up bi-monthly screenings of queer films. Through this initiative, Cineclub Queer intends to bring into focus a series of LGBTQ+ classical films of the world cinema (produced up to 1990), with the intention of rediscovering and re-discussing a patrimony already existent in the collections of the National Film Archives.
The poster of the film was made by Radu Pop.
Details on: Facebook // Cineclub Queer