33 films in the competition of Dracula Film Festival


33 films, the latest and most novel of them all, have been selected into the competitions of Dracula Film Festival, to take place in Brașov between 12-16 October, at “Sică Alexandrescu” Theatre, Cinematheque Patria, Cinema One and Reduta Cultural Centre. 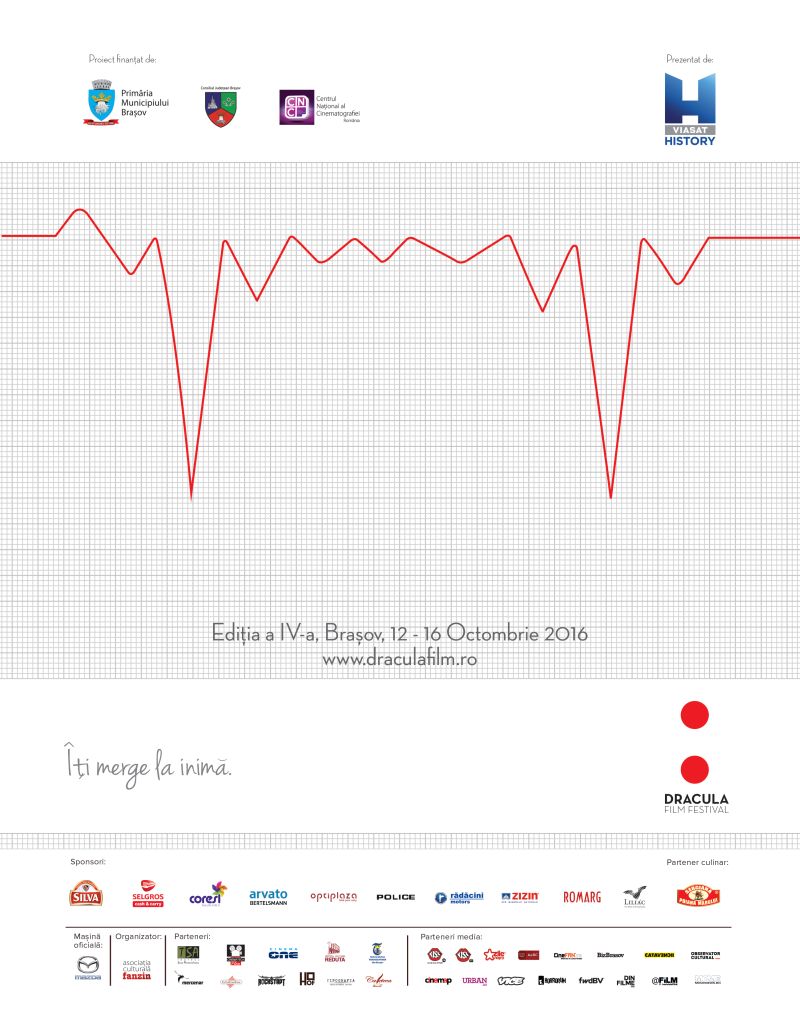 Six feature films from Russia, Hungary, Sweden, Denmark, Serbia and Great Britain are competing for the Dracula Trophy. One of them is The Rift (directed by Dejan Zecevic, 2016), the first SF coming from Serbia after the breakup of Yugoslavia, and which replaces this country on the fantastic cinema map: the investigation into a crashed satellite leads to a zombie epidemic.
Paranormal Drive (directed by Oleg Asadulin, 2016) is a Russian production, surprisingly simple and efficient, whose main character is in fact a possessed luxury car, and The Man Who Was Thursday (directed by Balazs Juszt, Hungary, 2016), a paranormal thriller with erotic vibes, brings into focus for the second tie to the Dracula Film Festival audience the actress Ana Ularu, present also on the credits of the opening feature, Inferno (directed by Ron Howard, 2016). In The Open (directed by Marc Lahore, 2015, Great Britain), three rebels are playing tennis in the middle of nowhere daring to dream, though life turned into farce and the end of the world is near. The Giant (directed by Johannes Nyholm, 2016) is a gorgeous and very touching story of individual triumph, and a fairy tale bursting with vitality, symbolism and colour. What We Become (directed by Bo Mikkelsen, 2015), the first Danish zombie film, an impressive production, was also present in the selection of the festivals from Sitges, Bruxelles, London and Zagreb.
Those who will decide which of the above will get the Dracula Trophy are three professionals, responsible of similar international first rate festivals: Magnus Paulsson (Lund International Fantastic Film Festival, Sweden), Ian Rattray (Horror Channel FrightFest) and Jonathan Lanaerts, (Bruxelles International Fantastic Film Festival). The selection was made by Anca Grădinariu and Alin Ludu Dumbravă.
In the competition for Little Dracula Trophy, 19 shorts were selected, most European, but also from Mexico, Spain and Australia: psychological thrillers (Autoscopy, Norway) and fantastic films with syrens (The Orchid and The Wasp, Turkey), films with Romanian werewolves (Blue Moon, UK), or with Spanish aliens (Alien Inside, Spain). Zombie movies are, of course, a must (We Together, SUA), as well as films with notorious criminals (Beer Cellar, UK).
Eight films, innovative in relation to their screenplay, directing or benefitting from memorable visual approaches are to be found in the Romanian shorts competition. This is the first year when 2 animations were included in the competition, very varied stylistically and attentively crafted, either as regards their manual design (Mom, Dad, I Have Something to Tell You, directed by Paul Mureșan), or their collage and computer graphics (The White Box, directed by Mihai Păcurar). Another premiere for this section is the presence of a supernatural erotic thriller erotic (Puzzled, directed by Tudor Botezatu). The 100% local supernatural films are also present, such as Mă cheamă Costin/My Name is Costin, directed by li Radu Potcoavă, and 40 Days by Sorin Tănase.
The competition also includes one of the most brutal short thrillers in Romanian cinema, The Perfect Investment, directed by Ibolya Simó, as well as a dystopia on dreams' extinction (Dreams for Sale, directed by Vlad Buzăianu).
The shorts competition jury is made up of Alexandra Safriuc, co-founder of ShortsUp, well-known DJ and radio producer George Andreescu aka Gojira, and Silviu Gherman, writer, musician and actor. The selection of international and Romanian shorts was made by Cristian Mărculescu.
Details at: Draculafilm.ro