“Romanian Short Waves 9”, at the Night of Cultural Institutes in Bucharest


On Friday, 24 June, 2016, 15 cultural institutions of Bucharest will organise, under the EUNIC aegis, the 10th Edition of the Night of Cultural Institutes. 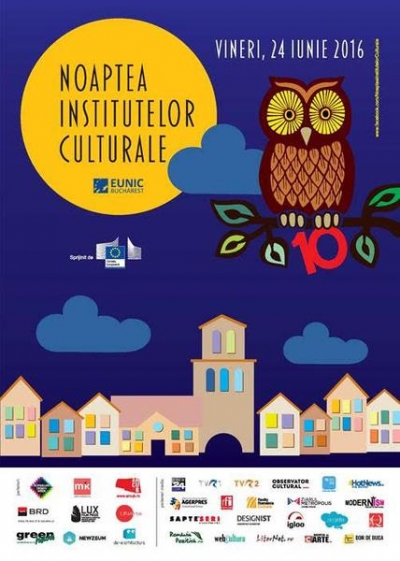 The night of 24 June will bring numerous exhibition projects: a comics' dialogue based on improvisation, a graffiti performance, a sculpture exhibition, the “Miguel En Cervantes. Panorama of Wonders” comics' and illustration exhibition, the “B L A N K” gathered objects' exhibition, the “Romanian Design Week Classics” architecture, product design, fashion and graphic design exhibition, the “Greek Traditional Garments” clothing exhibition, the “Most Beautiful Books” itinerary exhibition, the “Azulejo: Story of tiles”, “Romy Schneider” or “Immota Manet” photography exhibitions (displaying, in black and white photos, the aftermath of L'Aguila earthquake).
The film offer is also a rich one. The following will be made available for viewing: Mediterranea, by Jonas Carpignano, Prospero's Books, directed Peter Greenaway; Romanian Short Waves 9, Romanian shorts presented at Cannes 2016; Short from Spain, short features selected by the Cinema and Visual Arts Institute of Spain; Sissi I, by Ernst Marishka, starring Romy Schneider in the role of Empress Elisabeth of Austria; La Passante du Sans-Souci/The Passer-by, by Jacques Rouffio, the last role played by the same famous French-German actress, or Șoptește-mi dacă uit/Whisper if I Forget, by Çagan Irmak.
Furthermore, in the year marking the anniversary of 400 years since the death of writers William Shakespeare and Miguel de Cervantes, the programme will include a theatre performance after Shakespeare's sonnets, as well as screenings, lectures and a debate dedicated to the great British playwright, a comics' and illustration exhibition adapted from a play written by Cervantes, and also a lecture-performance based  on fragments of the “Entremeses” by the  beloved Spanish writer.
The foreign language courses, the intercultural debates on diversity or stereotypes, the theatre performances and the workshops for children and adults – among which, the one dedicated to Turkish traditional art of painting on, onto ebru, or the one teaching children to build their own bird-house, using the papier-mâché technique  – will complete the multi-disciplinary palette of June 245th.
The programme will unfold between 12:00-02:30, in 12 cultural locations of the Romanian capital city: ARCUB - Hanul Gabroveni, British Council, the Czech Centre, the Turkish Cultural Centre “Yunus Emre", Green Hours, Goethe-Institute, Balassi Institute – the Hungarian Cultural Institute of Bucharest, Cervantes Institute, the Romanian Cultural Institute, the French Institute, the Italian Cultural Institute and the European Public Space, which will host over 50 events proposed by the 15 cultural establishments. Admission will be free of charge.
Details on: Facebook // Noaptea Institutelor Culturale