The 15,000 Euro Transilvania Trophy offered by Staropramen went to The Heiresses (directed by Marcelo Martinessi).
The TIFF 17 Closing Gala will be broadcast on TVR1 on Sunday, June 3, 2018, starting with 23:00.
Director Dagur Kari, casting director 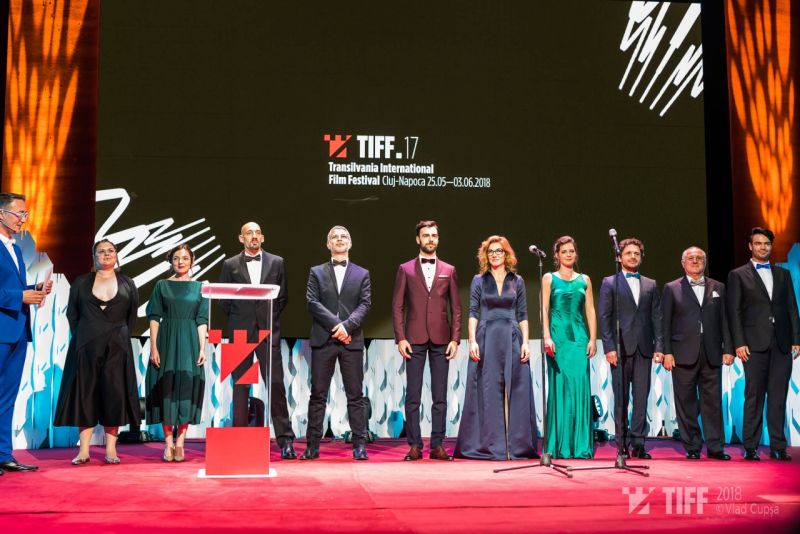 and director Stephane Foenkinos,  writer Rebecca Lenkiewicz, actor Vlad Ivanov and director Agnes Kocsis also decided the 5,000 Euro Best Directing Award, which went to Hlynur Pálmason, the director of the film Winter Brothers, who impressed the jury with “his passionate, beautiful and energetic film”. Three of the actors from Carlos Marques Marcet`s Anchor And Hope, Natalia Tena, Oona Chaplin and David Verdaguer, shared the Best Performance Award for “the way in which they complement each other with intelligence and charm, creating moving and humor-filled roles.”
Two courageous films received the 1,500 Euro Special Jury Award, offered by HBO. The jury appreciated Asghar Yousefinejad`s The Home for being “profoundly anchored in reality, with complex morality”, while Anna Kruglova`s Scythe Hitting
Stone was considered a revelation, a graduation filmthat is extremely well structured. The FIPRESCI Prize, offered by the International Federation of Film Critics for a title in the To Be or Not to Be Politically Correct? section went to the dystopian Life Guidance by Ruth Mader.
Gustav Moller’s minimalist The Guilty was appreciated by TIFF film lovers and received the Audience Award offered by Mastercard. Starting with this November, the film will be distributed in Romanian theaters by Bad Unicorn.“
I would love it if every year we could have Romanian films Touch Me Not and Charleston in the competition,” declared TIFF Artistic Director Mihai Chirilov, before thanking directors from around the world for coming to TIFF.
A guest of honor for this edition, Fanny Ardant shone on the stage of the National Theater as she received the standing ovation of everyone present. She received the Lifetime Achievement Award from TIFF’s President. 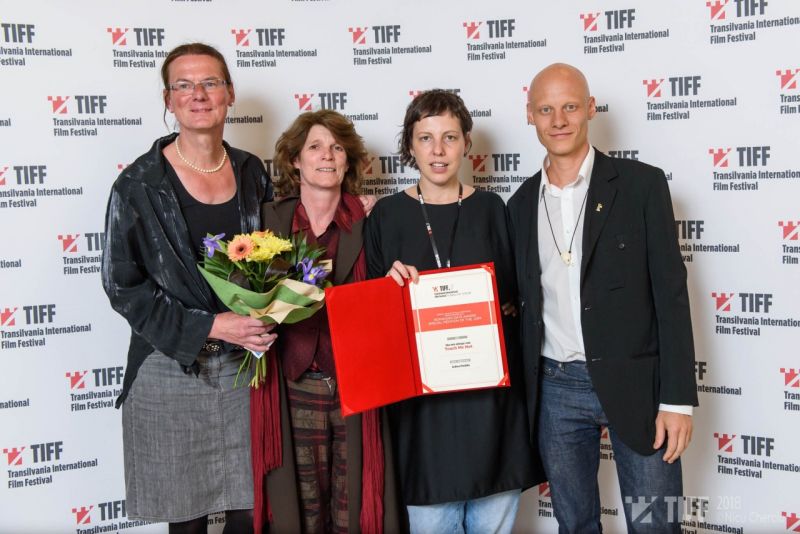 The charming Anna Széles` 50 years of stage and film presence were also honored at TIFF. Actor Florin Piersic, her former partner and co-star, handed her the Lifetime Achievement Award in front of an audience fascinated by their stories and by the abiding love they still have for each other. “I was lucky to have had wonderful directors and partners who stayed in my heart,” declared the actress.
Introduced by Cătălin Ștefănescu as an “extremely delicate character” and “one of the iconic actors of Romanian film”, Dan Nuțu, the founder of Aristoteles Workshop, received the Excellence Award offered by Mercedes-Benz.
Pororoca won the Romanian Days: Best Feature Film Award, consisting of 10,000 Euro  worth of post-production services offered by Cinelabs Romania. 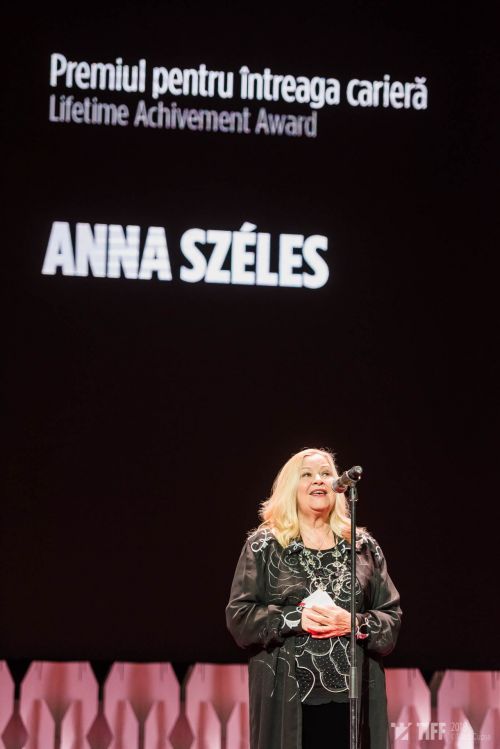 Ivana Mladenović’s controversial Soldiers. Story from Ferentari received the 1,000 Euro Romanian Days: Best Debut Feature Award offered by Banca Transilvania.
“For the courage and dignity exhibited both by the director and by the characters she constructed.” Berlinale winner Touch Me Not received a Special Mention from the Romanian Days jury. “It is very complicated to place a film like this one on the market. Your warmth proves that the market underestimates the emotional intelligence of the audience”, said Adina Pintilie, the director of the film that received the Golden Bear in Berlin.
The Romanian Days: Best Short Award, consisting of 1,500 Euro offered by Campari  and 5,000 Euro worth of camera, electric, and grip equipment offered by CutareFilm, went to Bogdan Mureșanu’s The Christmas Gift.  Two Special Mentions went to Dorian Boguță’s Sunday “for its sensitive portrayal of men in a group home, in whose stories the jury could glimpse their own” and to Anghel Damian’s directorial debut, Michelangelo, “for the moving story about the importance of truth, even when truth hurts.”
The 500 Euro Shadow Shorts Competition Award offered by PMA went to Fran Casanova’s Something in the Darkness.
The most popular film of this section, Daniel Sandu’s feature length directorial debut, One Step Behind the Seraphim received the 1,500 Euro Romanian Days Audience Award offered by Dacin Sara.
Eliza Zdru won the Alex.Leo Șerban Fellowship worth 2,500 Euro, offered in partnership with Conceptual Lab, for the development of her feature-length documentary Learning Teaching. The board reviewing the applications also granted a Special Mention worth 5 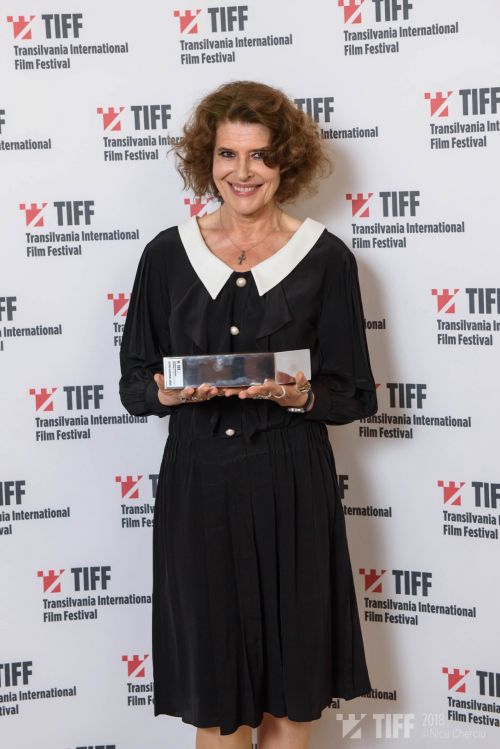 00 Euro to Tamás Chirodea-Ambrus (vlogger on the Tomtastic Movie Reviews YouTube channel). Another Special Mention worth 1,000 Euro was awarded for the first time to a young Romanian actor who stood out in a 2017 production, short film, or feature film: Mircea Postelnicu, for his lead role in  Călin Peter Netzer`s Ana, mon amour.
“In our road to death we need to support each other a little more” cautioned the voice of the late director Lucian Pintilie during a moving homage screened in the National Theater. 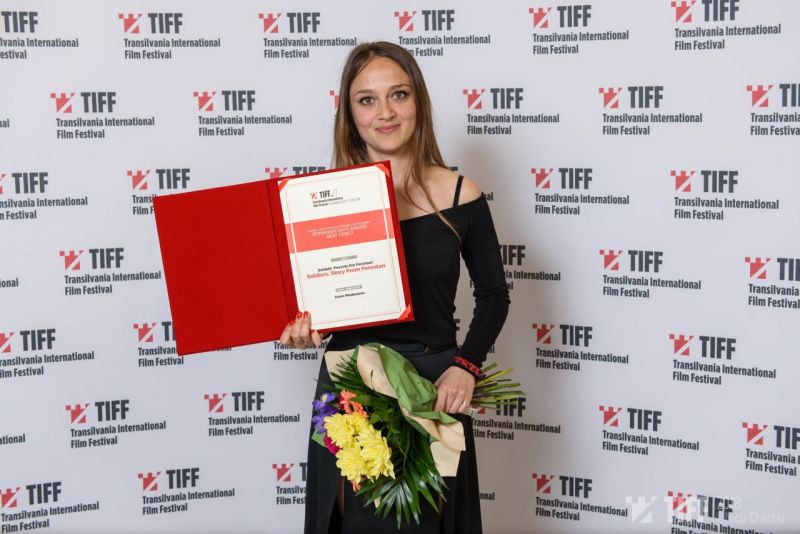 The moment impressed the audience and the TIFF President, Tudor Giurgiu, dedicated the entire evening to him.
The 20,000 Euro Eurimages Co-production Development Award of the Transilvania Pitch Stop went to Pavle Vučković’s project Frost.
Post-production services worth 25,000 Euro, offered by Chainsaw Europe went to
The Last Bus by Nándor Lőrincz and Bálint Nagy.
In the Transilvania Pitch Stop Workshop, the CoCo Award went to Cristian Pascariu’s project October, which is invited to the Connecting Cottbus East West Co-production Market in Germany.
The Villa kult Cultural Residency, a five-day residency for script development in Berlin, went to the winner of the To the North by Mihai Mincan and the Award offered by the Romanian Film Centre went to Anton Durbală`s film, Santa
Barbara.
The Young Francophone Jury Prize, offered by TV5 Monde, Institute Français, and RFI Romania went to The Prayer by Cédric Kahn.
(04.06.2018)