This year, an old wish of the organizing team of the Bucharest International Film Festival comes to life – the section Films 4 Kids. We are happy to have the opportunity to approach a new audience category, besides the traditional one – the 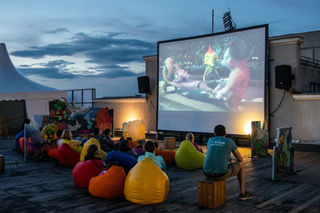 the young audience made of children, teenagers and families.
In the August 28-30 weekend, the kids and the adults will be able to enjoy the experience of watching three touching, internationally awarded productions: Marona's Fantastic Tale / Călătoria fantastică a Maronei, directed by Anca Damian, Aïlo: une odyssée en Laponie, directed by Guillaume Maidatchevsky and La tortue rouge, directed by Michael Dudok de Wit. What they have in common is the force, the courage and the friendship, the values that we intend to inspire and lead the BIFF audience.
The screenings of the Films 4 Kids section will take place in a special place, a rooftop kind of cinema at the Opera Comică pentru Copii (Calea Giulești, no. 16).
This location was not chosen for no reason. This is a culture institution which is unique in the world because of the audience age segment it addresses. It aims to help the little ones get close to art and culture, both through good quality performances and many other extraordinary projects.
The access to the screenings of the Film 4 Kids Section is free, based on reservation, upon seats availability. Moreover, after the film screenings, Opera Comică pentru Copii invites you to stay a little longer in the same place, to watch the stars, the planets and satellites through a telescope, for free, as part of a project of OCC Observatory.
The Closing Gala of the 16th edition of BIFF will atke place on September 2, at 19:30, at the Peasant Museum Cinema. After announcing the winners and the awards given by the Romanian Cultural Institute, the evening will continue with the screening of the film The Truth, directed by Hirokazu Koreeda, starring Catherine Deneuve and Juliette Binoche. The film opened the Venice Film Festival in 2019.
Details: BIFF
(22.08.2020)