From February 23 until February 25, 2018, from 19:00, the Cinema Union in Bucharest organizes an event dedicated to the memory of an important Romanian-German filmmaker: “Three films by Radu Gabrea, based on three novels by Eginald Schlattner”. For three evenings in a row, the book and film lovers will be able to see the intertwining of literature and film, the trilogy of the Saxon writer translated on the big screen by Radu Gabrea. On February 9, this year, it`s already been a year since the film director passed away. He was one of the most important representatives of the so-called `70s generation in the Romanian cinema and a worthy reformer of the national film industry after 1989. 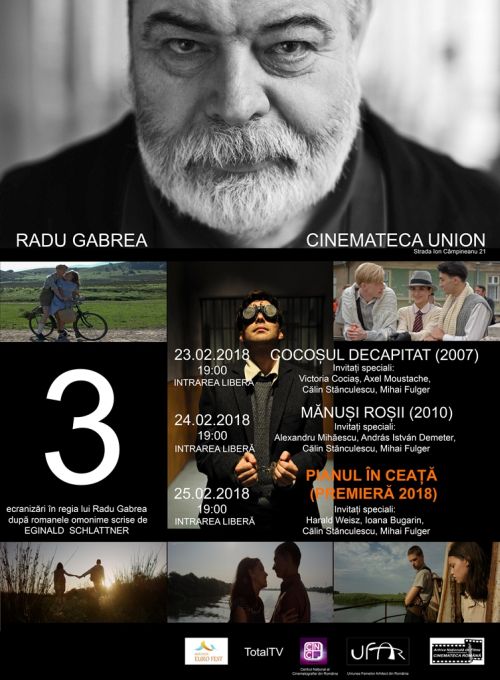 In order to honor the filmmaker`s memory, the screenings from the Cinema Union (the activity of this hall is closely connected to Radu Gabrea`s name) will be flowed by discussions with people that were close to the director and with some of his collaborators: the actors Victoria Cociaș (his wife), Ioana Bugarin, Alexandru Mihăescu, András István Demeter, Axel Moustache and Harald Weisz, as well as the critics Călin Stănculescu and Mihai Fulger.
The access to the event is free, upon seats availability.
On Friday, we`ll enter the war atmosphere, in the Saxon community of Transilvania, through the film The Beheaded Rooster / Cocoșul decapitat. On Saturday, we won`t wear red gloves, but we`ll be carried by Red Gloves / Mănuși roșii in the dark halls of the Brașov Security. And on Sunday, we`ll abandon ourselves to a film poem, Radu Gabrea`s unfinished film, The Piano in the Fog, based on Eginald Schlattner`s third novel of the trilogy, “The Clavier in the Fog”. The screening at the Cinema Union represents the premiere of the film.
The event is organized by the Eurofest Association, the organizer of the EuropeanCentral Film Festival in Timișoara and Total TV, in collaboration with the National Film Center, the National Film Archives-The Romanian Cinematheque and the Union of the Women Architects in Romania.
The Beheaded Rooster represents the first film rendition of a fundamental period in the history of the Saxon community, with deep echoes until the present moment. Radu Gabrea`s film tries to keep close to Eginald Schlattner`s novel and tells us a story that marks the beginning of the end of the German presence in Transilvania. On the one hand, the myth of the Transilvania Felix, of the happy cohabitation of different ethnic groups; and on the other hand, the increasing intrusion of the Nazism in the life of the Transilvanian Saxons.
Red Gloves presents a medical explanation of the abomination that brings abomination. The subject is very powerful and current in the present-day and it is presented from the historical and psychological perspective of the act of betrayal, under the threatening, the pressure and the force inflicted upon by the repressive Security organs. If some of our fellow countrymen used to “inform”, sign “contracts” or “adhesions”, made “detailed reports” only out of some kind of inexplicable zeal, out of mean interests or out of gross godlessness, others have done it under mental pressure, under threats and even physical punishments that are hard to imagine, so much the less to endure. For the young generation, this X-ray-like film comes as a bitter lesson about times and about the man who let himself be defeated by them, instead of keeping his dignity.
The Piano in the Fog, Radu Gabrea`s last film which unfortunately was left unfinished, is the adaptation of the novel “The Clavier in the Fog” written by the same Eginald Schlattner and tells the story of the young Saxon Clemens. He lost everything after the war, when his family was declared bourgeois; the factory was nationalized, his father was arrested and is in prison, while his mother has gone missing. The film brings the sufferings of the people and also their hopes in the years 1948 to 1951. The narration is chronologically placed between the events from The Beheaded Rooster and the ones from Red Gloves and the film closes Radu Gabrea`s film trilogy based on Eginald Schlattner`s literary trilogy.