After the success of the animated feature length films Crulic and Muntele magic (Magic Mountain), after the fictional featureO vară foarte instabilă (A Very Unstable Summer),where she experimented visually, Anca Damian is currently making a „classical”film, Perfect sănătos (Perfectly Healthy). And this time the director only experiments working together with her son, actor Anghel Damian, who plays the lead character. She admits that the screenplay she wrote together with Lia Bugnar has a strong personal note. The hero of the story, a young lawyer (Anghel Damian), sets out in search of the truth about his father's (Vlad Ivanov)fatal accident, but also in a quest of self-discovery.
We got on location – a Bucharest restaurant – on the day a difficult scene was shot. Anghel had to do a stunt – falling on a spiral staircase. The Director of Photography, Oleg Mutu, set up the camera, two stuntmen came to assist the actor, and Anca Damian was there with the crew, but with the videoassist team as well. After Anghel put on various accessories to protect him during the fall, Alexandra Alma Ungureanu ensured he was well dressed for the shoot.
The shoot went well and Anghel Damian remained „perfectly healthy” after the fall. Which was to be expected, considering that he had trained a lot with the stuntmen, and that he is a basketball player, so he keeps very fit. 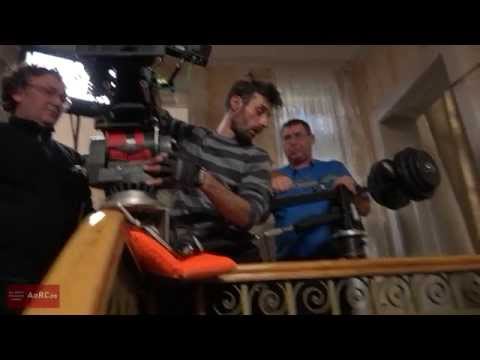