Before the end of the film, there are a few shots showing different spaces: a theatre stage, a boxing ring, a street. In other words, it`s a review of the main places that Florin Șerban took us to in Box. It`s a kind of a recap of a mathematical formula within the frames of which this film (which may feel apparently cold) would fit and it would sound like this: we have three unknown items: the stage, the ring, the street; we need to 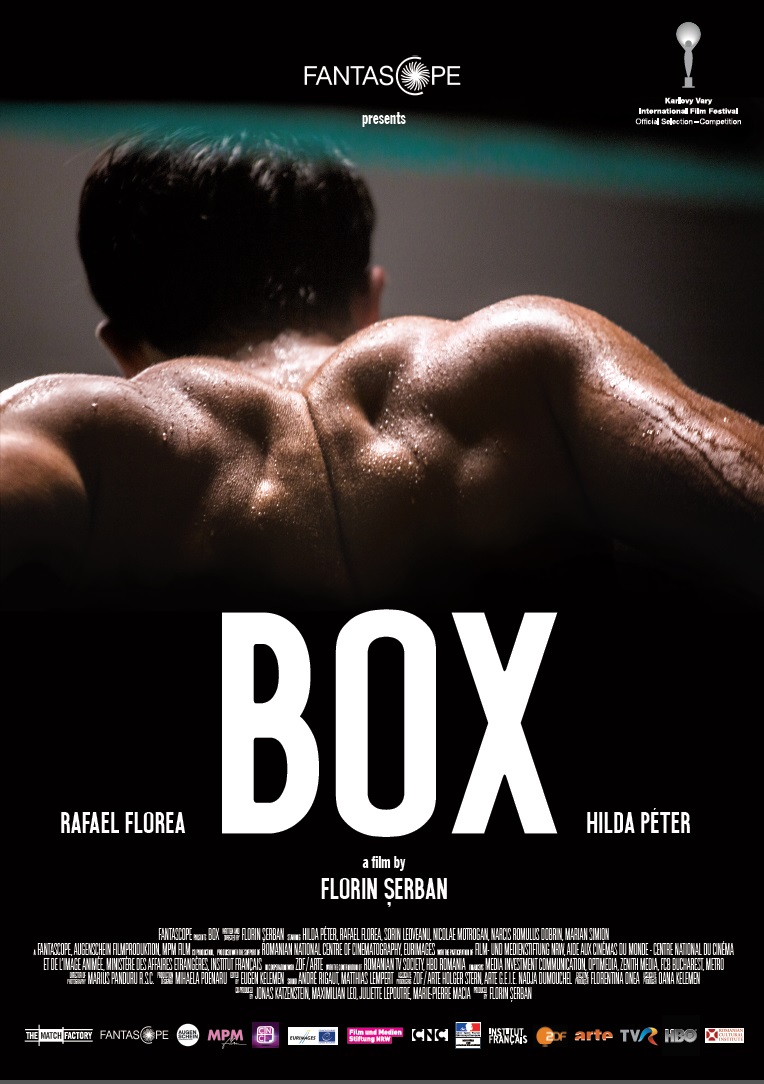 find… What are we looking for? Exactly what we saw during the 93 minutes of the film; the memento before its end is only the essentializing of a possible connection of the three unknown items, two of them coming from worlds that, at first glance, are so different from one another – theatre and boxing. I take the risk, I won`t abandon my connecting the film to the science of sciences, saying that despite the dashing, furious attacks in the boxing scenes, the film is built with what can be called (and not at all for no reason) “a mathematical self-possession”. Just like Corneliu Porumboiou, the one from When Evening Falls on Bucharest or Metabolism, or from The Treasure, Florin Șerban belongs to a film makers category who deliberately shut down emotion, postpone it,  who intentionally unplug it. I return to the spaces that are shown to us. A theatre stage, rehearsals for “Three Sisters”.

One of the actresses is Cristina (Hilda Peter), our protagonist (30-35 years old). We`ll watch her on her way home in beautiful long takes (Marius Panduru), I dare say Truffaut-like, seen from behind, with her skirt slightly dancing on her thin thighs, following her steps rhythm, just like Truffaut`s leadind ladies from The Man Who Loved Women, “whose way of walking give harmony to the world”. It`s late in the evening, the old narrow streets of the Transylvanian town are empty, unreal-like, they seem to be prepared to become the scene of an encounter. A young man, looking like a teenager follows her almost to her house. The shots will repeat themselves, almost identically, but this second time, the woman casts him a quick look before entering the gate. In the meantime we find out that he is a young boxer (he is 19 years old); he works in a car wash, with a great dislike towards arrogant clients. He is a loner, he lives with a grumpy grandfather, in a cottage at the outskirts of the town. Nothing from what Rafael (this is the name of the character but also of the actor, Rafael Florea, at his debut with this film) lives or says or from what he shows, won`t back the feeling of a fascination, of an obsession of the senses which can be explained at his age for the mature woman who came his way, we don`t know when. An hour of the film goes by until we see the two of them face to face and then the first gesture of nearness is…a slap that Cristina gives in Rafael`s face, which the young man returns to her immediately,

but with care (we understand that). It`s more like a game and not a punishment. The woman accepts the invitation “to drink some juice together”, which is the mocking innocence code of the young people nowadays, but here it`s not the case. Instead of any declaration, or confession, the boy asks her directly, being careful with the details: “If you weren`t married and you didn`t have children, would you marry me?” It`s a huge question which can hide many things: the boldness of the shy teenager (it`s now or never), lack of understanding the situation, the chance to be himself, of asking a straight answer, which is not given to him in his daily life. His coach, a rogue, orders him to let himself be beaten in the ring. And when the boy asks “Why?” his answer is “because I`m the one who decides here”. His grandfather asks him to cut a nut tree from the courtyard. “Why?” the boy asks. “Just like that”, the grandfather answers. After getting a “maybe” from the woman who feels amused by the hypothetical challenge, we will get see the two of them together again only in the final scene of the film. And this time it is directed by them.Above our heads. The film of their getting close to each other is left unknown to us, it travels beyond the viewer`s look, just like the rivers that disappear at some point only to appear again some other time. It is a strategy of the postponing, of the forbidding to get to find out everything about the people`s lives. The director makes plenty of room to the suggestion of a search. She would govern the lives of both of them. The young man is a boxer, he juggles his life in the ring, in the training room, between the punches he receives and the ones he fights. Boxing is the realm of intense, authentic feeling. Cristina is an actress, we see her during rehearsals not having a proper feedback to what the director - who preparesthe “Three Sisters” performance (Cătălin Mitulescu) - expects from her; she is somehow lethargic, spiritless in assuming her character. At home she is much the same; from what it seems, her husband, who is an actor as well (Sorin Leoveanu) holds the rhythm of the marriage life. We cannot figure out if the man feels the lie the woman tells him when she prepares to go out of the house in order to meet a stage movement trainer. The theatre is the space of pretense, of miming to live some other lives. We`ll find our protagonist looking for Rafael at his home, waiting for him to come back from the decisive match, leaning against the new fence, then in his room, listening to one of his favorite songs, which later on became “their song”, the theme of their being together. The scene doesn`t have a psychological explanation, in the narrative order it even seems quite clumsy, but not the psychology may give us the key. I don`t know if the two of them have a great need of each other, as the film director says, that each of them may fill a gap in the other one`s existence. I don`t see the void in Cristina`s life: she is an actress who plays important parts, she has an important husband, a child etc. And actually we don`t feel she might long for something in particular. And we can`t blame the hormones for almost bursting into the approaching middle age crisis either. And still, without having any support in psychology, and without satisfying any tiny curiosity (when did they meet, how did they get to the point where they got?), the film, with its long takes and sudden cuts, has the tension of heading towards the inevitable: the man and the woman will meet in a discreet hotel. First, she goes in, then he follows her. What was supposed to happen, happened. Everybody`s life may be crossed by this kind of underground currents. If not the cinema, who else can detect them? Quod erat demonstrandum. I hope that Dan Spătaru`s song “All Our Paths” (Drumurile noastre toate) that can be heard at one point in a restaurant was not a choice with a certain intention (let`s say, an ironic warning), but pure chance.