On a hill, close to the town Câmpulung Muscel, Emanuel Pârvu, the director of photography Silviu Stavilă, the actors Șerban Pavlu, Rodica Negrea and Mihai Dinvale and the members of the large technical crew are shooting some sequences for The Side (working title) / Partea nu preafericită a lucrurilor. They must keep an eye on the sun, to ensure the continuity, they must stop whenever the planes fly above their heads. Besides all that, they get birds chirping, dogs barking and all kinds of domestic animals sounds.
“The less bright side of things” is that it rained heavily and that the hill is muddy, which makes me borrow some “caoutchouc shoes” from the local people. The crew had been there for a month and it was ready for any kind of weather. Emanuel Pârvu decided that, helped by his friends, he may embark on the adventure of making an independent feature film. The producer is Miruna Berescu (FAMart), in coproduction with DaKino Productions and Ceramus Film. Before starting working on the feature film, the director tested the adequate story and stylistics with the short film Meda.
The story focuses on the forester Doru (Șerban Pavlu) whose wife dies and who fights with the system to keep the girl that they had in foster care and with his parents-in-law (Rodica Negrea, Mihai Dinvale), who cannot understand his obstination. The social relationships in an “enclosed”, conservatory community with hard-working and determined “uplanders” are observed – how else – in a moment of crisis.
They shoot many takes, they discuss the scenes. All the actors are pleased that Emanuel Pârvu is an actor and that he has a different approach in working on the characters. “If you don`t understand, he acts it out for you”, Șerban Pavlu says. They have worked together for many theatre and film projects, they liked the screenplay. The film is in postproduction now and the premiere is scheduled for 2017.
Cinematography: Valeriu Ciubotaru 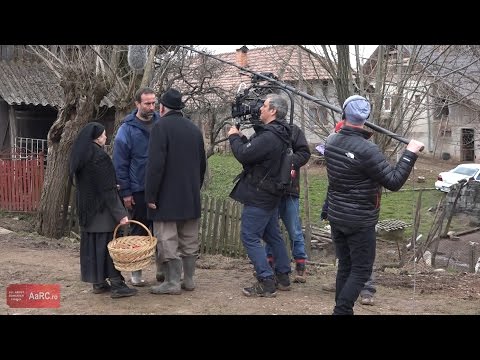