Graduate of the Theatre Conservatory in Bucharest, class of 1948.
“The cinematographic destiny of Marga Barbu seemed to be, above all , her part as Anitza. This meant years and film series upon series , savage beauty, devouring passions, night cavalcades (which could happen  also at dawn) outlaw/justice facts  set up in alcoves, oriental veils, menacing looks - real or faked- strained through the fire lines of her gaze, long and passionate embraces before breakups, inbetween hurried horse mountings” (Sanda Faur, Almanah Cinema 1975).
“She was an ambitious being, curious to discover- for example how to speak Japanese- ready to risk and try out her strength. She was a fighter. She liked to be challenged. She liked complicated characters , with multiple ranges of facets, composition roles that went beyond her physical capabilities…Miss Aurica was and stays the pinnacle of her career." (Eva Sîrbu, vol. "Actori care nu mai sunt")

Marga Barbu about...
...actors
: "you never know what an actor is capable of until you challenge him"
...her film debut: "Cwhen I heard for the first time the word ”ACTION” I thought I would faint. Now I realize that this emotion, at least in my beginnings, did me wrong. No matter how much I achieved in my rehearsal scenes, after hearing”ACTION”there followed a twich who melted my artistic everything.This is the fate of an emotional nature such as mine" (Magazin estival Cinema, 1983)
...the decisive moments of her career: "All of them were crucial moments. Marta, and Anitza and Gherda…. but first and foremost the moment I abandoned dance for the stage" (Almanah Cinema 1984)
...audience: „The audience? It is for the audience that we strive…to make them laugh or cry but of course…not by all means. Educating the public is not an empty word  and I think that this is the purpose of the valuable shows. Even more so when we know that our audience is warm, receptive and worthy of satisfying. The greatest joy of an actor is when, after the show , be it film or staged play, he can still see the emotion on the faces of the spectators, the trace of a tear or  the joy in it. Isn’t it for that reason that we drag him away from his daily routine into our fictional and, oh so real, world?” (Cinema nr. 6, iunie 1968)

Critic’s choice:
„After a rather long lapse  from Eagle 101 / Vultur 101 to The White Trial / Procesul alb that film director eye opened almost simultaneously with three directors: Iulian Mihu, Geo Saizescu and Dinu Cocea. Marga Barbu became in turn Marta, the bar dancer in The White Trial, Irina in At the Earth’s Gates and the innkeeper in The Outlaws .Three parts out of which  two were diametrically opposed: the unfaithful and commonplace geologist wife from At the Earth’s Gates / La porţile pământului and Anitza from The Outlaws / Haiducii  a character full of spontaneity and beauty of soul. Hence the revelation: after that long lapse, Marga Barbu re-bonds with cinema and not at the lukewarm and shy temperature of correctness but in a sort of explosion that comes around after a long experience, after an uninterrupted contact with film experience. Her  performances-especially Marta and Anitza- are burning with temperament and  long stocked energy. She seems to act for all the years she stayed away from film .She’s full of passion, sincerity, seriousness. Trying to tame her uncertainties and emotions, to make  the most of her capabilities and knowledge. The revelation Marga Barbu could be called the victory of passion for film and of perseverance." (Eva Sîrbu, Festivalul Mamaia '66) 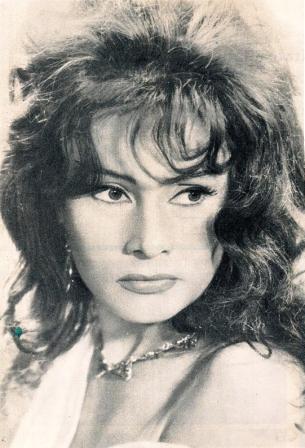