Graduated from the Faculty of Philosophy of the University of Cluj (class of 1997), the National University of Theatre and Film "I.L.Caragiale" (class of 2002) and Columbia University New York (class of 2007). In early 2011 he creates his own production house, "Fantascope" and an Acting School.

Florin Serban about Acting School for Variety.com
”I started The Acting School four years ago. It is a personal project, very dear to me. It is partially funded through tuition from people that can afford to pay it, and by me, for people that couldn't afford tuition but have something 'going on,' like Rafael (actor Rafael Florea - Box). People from various backgrounds attend classes, spanning from ex-cons to established actors in the same class. So, it is not only for people that didn't study acting in an institute, but for people who want to study film acting in a different way. More direct, more visceral, very intuitive, without so much 'compromise' and 'protection.' They learn from me and from each other.” (2015)
”Mixing actors that studied in an academic environment with people that studied in my school and people who didn't study acting at all was not programmed. I have stories to tell and I try to find the best way to tell that particular story... I try to work with people that strike me as faces, and [have] ways of acting regardless of their educational or personal background.” (2015) 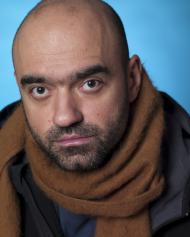