Synopsis: The marital crisis of Romeo and Julieta Ionescu could easily end with a break-up. Romeo files for divorce with his mother by his side as an ally. His wife, their three children and, last but not least, their great grandmother unite against him.

Critic’s Opinion
“A family drama which untangles with the help of a comedic character and, naturally, by means of comedic devices. The film is an example of how to grin and bear it, entailing verve and intelligence, and it pushes the envelope all the way up to parody hyperbole. This hyperbole makes the culprit aware of the ridicule he’s subjecting himself to, since the husband is rather old for his young man’s ambitions. The great grandmother acts admirably as a detonator of the comical verve, an explosion sustained by directorial and acting craft from beginning to the finish line, at which point the unfaithful spouse comes to his senses” (Alice Mănoiu, Almanah Cinema 1987) 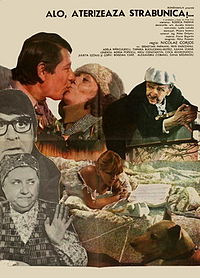