The filmmaker came to Romania for the 2015 edition of the Jewish Film Festival and now he is its official artistic director. LiviuCarmely has lived in Israel for many years and he is a professor at the Tel Aviv Film University. In 1973 he founded the film archives of the university – the Anda Zimand Film Archive, which now has more than 50.000 productions (Israeli and international, documentaries and features, student films), screenplays and film books. Every now and then an idea pops up and it seems relevant. That is when he makes a documentary. Without the pressure of placing it in a period of time or in a budget.
Having been abandoned by his mother, Liviu Carmely spent his childhood and teenage years in the orphanages of Romania. At 20 years old he decided to go to Israel where he went through the military service, then he made film studies. His professors were Amos Gitai and David Perlov. He became a professor himself and sometimes he produces documentaries. He married an Argentinian immigrant, so he doesn`t speak Romanian at home, but he has a group of friends from Romania with whom he meets constantly. He recognized himself in Tommy Lang`s film, Peter the third, that he included in this year`s edition of the festival which takes place in Bucharest.
Some years ago, his son`s reaction to the construction of a block of flats gave him the idea of the documentary The House on Tabenkin Street (2010). The film watches the building of the father-son relationship, just like the building of the block of flats across the street, emphasizing the parallelism between a house and a family. Revisiting his own childhood brings him in front of the orphanages that he had been to, but also in front of his mother who had abandoned him.
At the 2012 edition of the Bucharest Jewish Film Festival, he introduced his film, Independence for a Day and after that he stayed in touch with the organizers. From 2014 he is in charge of the films selection for the festival. For the 2016 edition he has a few ideas which might make the event more visible to the audience.
Cinematography: Dan Țuculescu 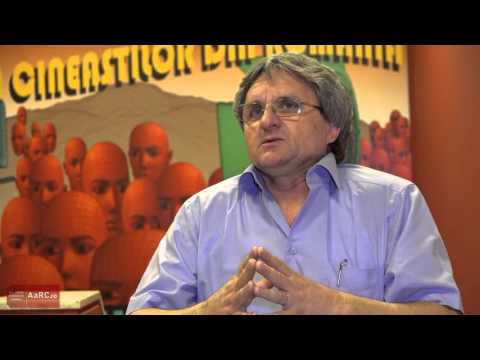