“Eastern Business” to be premiered in Chișinău


“Mihai Eminescu” Romanian Cultural Institute in Chişinău, in partnership with Brio Film Studio, is organising the official premiere of the feature Afacerea Est/Eastern Business (directed by Igor Cobileanski) in the Republic of Moldova. The event will take place the theatre house Patria “Loteanu” on 2 February, at 19.00. 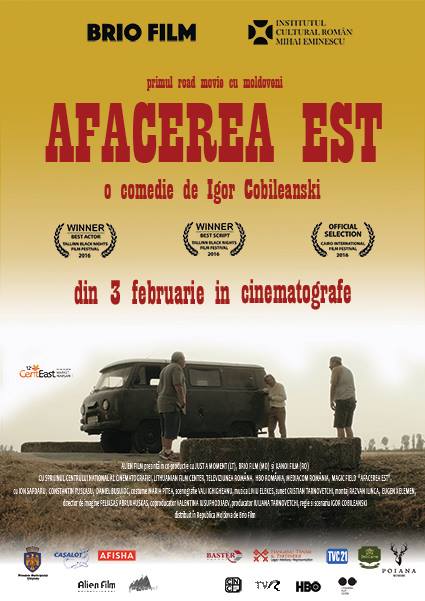 The comedy Eastern Business is a co-production made by Brio Studio in Chişinău in partnership with Alien Film in Romania. The film was officially premiered in Romania on 27 November, 2016.
Eastern Business tells the story of a friendship between two Moldavians, Marian (Constantin Pușcașu), a provincial intellectual, and Petro (Ion Sapdaru), an opportunist full of ideas. The two

embark on a crazy journey in search of the money necessary to fulfil their dreams: Marian wants to marry Veronica (Anne Marie Chertic), while Petro wants to buy a crane in order to rent it. They decide to become business partners and start working on a plan: to sell a train carriage full of horse shoes. Their plans amount to nothing, but Marian and Petro do not lose hope and try other methods to get rich.
AaRC made a feature report on the shooting sets of Eastern Business, as well as an interview with Igor Cobileanski, after the screen preview of the feature at TIFF 2016.