Every year, on January 30, the UNATC students and professors allow themselves one day of relache. It is the date that the culture history keeps as Caragiale`s birthday and that is why it is a moment of celebration and of celebrating the people who – by means of their activity – marked the art and the artistic education in our country. Every time the “institute” that he graduated from (the 13th, on the 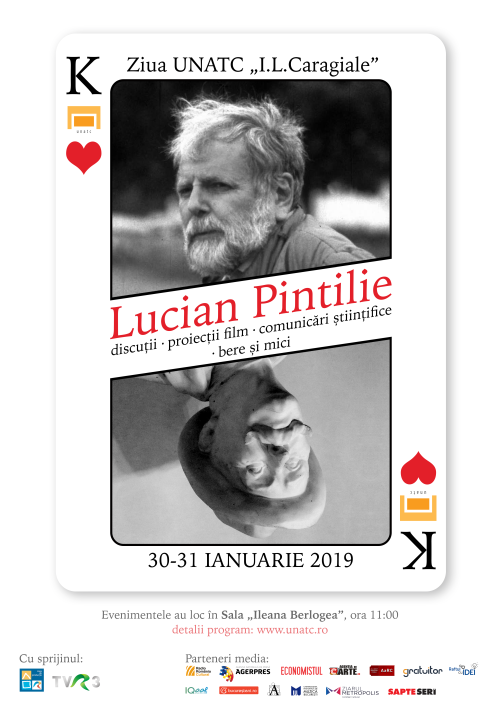 1956 promotion list – class of professor George Dem.Loghin) wanted to offer him the title of Doctor Honoris Causa, Lucian Pintilie refused. This year, UNATC will pay tribute to Lucian Pintilie - on the occasion of the day of the institution – on January  30 and 31, 2019.
“The fantasy of a great artist has no limits, first of all it is stimulated by the presence of other great artists who lived before them or at the same time with them; the past and contemporary artistic experiences project it in the most hallucinating, the most unlikely   directions of the knowledge. We are aware of the expression of these quests. It is always polemic, with what was before us or with the artist himself.” This is how Lucian Pintilie ended an article he wrote in 1965 for the “Teatrul” magazine.
On January 30 – The 2019 UNATC Day – at the “Ileana Berlogea” Hall, starting with 11:00, three of the former UNATC rectors – Victor Rebengiuc, Florin Mihăilescu și Florin Zamfirescu – will moderate an opened dialogue between students and Lucian Pintilie`s collaborators: actors, art designers, cinematographers, script writers, producers. At 14:00 two documentaries will be screened; they were made during the shooting of Why Are the Bells Ringing Mitică?/De ce trag clopotele, Mitică?(Fără titlu, a film by Horea Lapteș) and The Oak/Balanța (Filmare/Filmage made by Gabriel Kosuth).
The events continue the next day, January 31, 2019, when starting with 11:00, a session of scientific communications coordinated by prof. univ. dr. Laurențiu Damian will take place. In the afternoon two of Lucian Pintilie film works of art are scheduled: Why Are the Bells Ringing? / De ce trag clopotele, Mitică?(from 16:00) and The Oak / Balanța (from 18:30).
The event takes place with the support of the TVR and TVR3 Production House.
Details: www.unatc.ro