”The Sign of the Serpent”, or the fascination with imagery 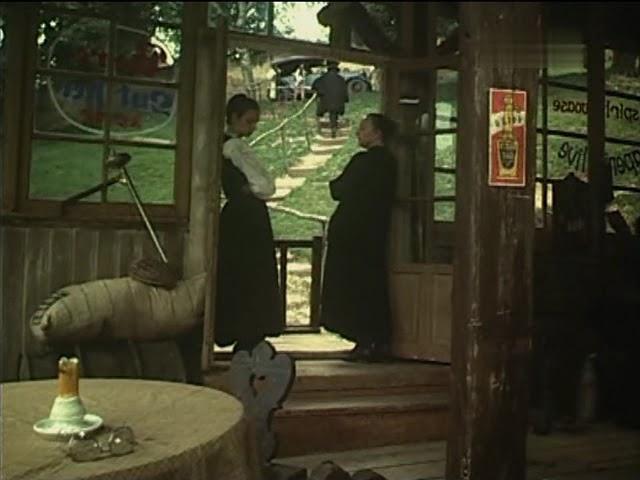 When this movie had its premiere, I think many people were impressed, even though they couldn't be vocal about it, with the ability of Mircea Veroiu to use a ”politically correct” subject in order to disparageparvenus and to make a film displaying his love for ornate beauty and imagery,his attraction to ”decadent” cinema genres, and his joy in creating spectacular sequences bordering ongrandiloquence. And not only that, but also o film allowing him to cast the very actors he wanted to work with, who were loyal to him and whose very names incited the viewers.
The Sign of the Serpent remains the story of a revenge that sweeps over the social and political events of the '40s. Because they sent her son to war and he never came back, his tough mother, Ecaterina Handraburu (Leopoldina Bălănuţă), decides to have her revenge on those who plotted to leave her heirless and grab her possessions. Those people are the village ”mobsters” (Ion Vâlcu, Dorel Vişan, Costel Constantin) who deal in people and cattle smuggling over the nearby border, making use of the services of a brave mercenary whose name is Alimandru (Ovidiu Iuliu Moldovan). Later on, Alimandru will switch to the old lady's side, becoming the hand of her revenge. 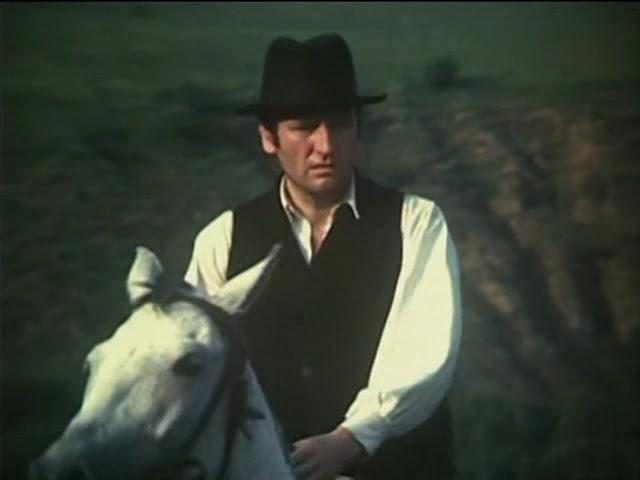 We could, of course, ponder, as Ecaterina Oproiu does very beautifully in her film review printed after the premiere, upon the idea of a fine line between worlds, between good and evil, between people and destinies, though the movie, as seen today, is poorly articulated as regards its screenwriting, with unidimensional characters lacking psychological subtlety. But Veroiu does not seem to have bothered with that, he seems swept away by the whirlwind of the spectacle. By the charm of the character Alimandru, a kind of half-bred between a gangster and a vigilante; he used to be a rider and a gunman, a handsome man even if he's missing an eye, but tamed by the new life and order (the arrival of socialism), so he got a job as a driver at the mayor's office. By the force of Ecaterina Handraburu, always stiff in her black mourning clothes, ready to fight God when she sets an icon on fire, but also willing to shake hand with the new order (represented by the young communist mayor). By the drama of the confrontation between the wicked mother-in-law and the submissive daughter-in-law, who dares in the end to revolt and throws and ink-holder in her mother-in-law's face.And by the temptation to use allegedly humorous clichés, such as horse-back stunts performed by Alimandru,or the graveyard shootout during the night.
However, beyond any considerations, the movie made by Veroiu lives on through the superb film photography signed by Călin Ghibu.The atmosphereof the entire story comes from the green of the fields trudged along by herds of black bulls, leaving behind curtains of white dust; from the light shining enticingly on the face of Dorina Lazăr, playing the part of a hooker; in the painful glimmer reflected by the shirts wore by Valeria Sitaru, playing the part of the widowed daughter-in-law; in the circle of the folk dance, ”hora”, as seen through the window of a dark room; and in many other similar instances. Paraphrasing something that D.I.Suchianu once said, I would call such instances ”units of beauty”.