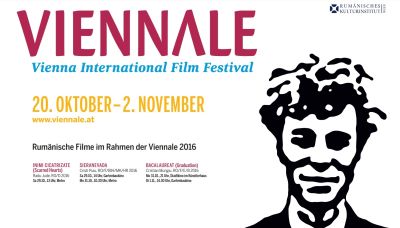 Scarred Hearts will be screened on Saturday, 29 October, at Metro Kino.
Sieranevada will be presented to the Austrian viewers on Saturday, 29 October, at Gartenbaukino, and on Monday, 31 October, at Metro Kino. The screenings will be attended by Puiu (regizor), Anca Puiu (producer), Ileana Puiu (actress in the film), Bogdan Zărnoianu (post-production editor), and Smaranda Puiu (copywriter).
Graduation will be screened on Monday, 31 October, at Stadtkino im Künstlerhaus and on Tuesday, 1 November, at Gartenbaukino, with actress Maria Drăguş in attendance.
The Romanian Cultural Institute in Vienna is the partner of the 54th Edition of the International Film Festival VIENNALE, which presents 300 cinema productions in sections dedicated to feature films, short films, documentary and experimental films, attended by industry representatives, by actors and directors.
Details at: www.viennale.at // www.rkiwien.at