The only documentary film festival dedicated to the Romanian productions already has a constant audience for the complex program of the event. This year Docuart brought 20 Romanian premieres, but also films from the National Archives. The Ovidiu Bose Paștina tribute brought on screen nine feature films made by the filmmaker, gathered by Cornel Mihalache, who used to be his colleague at Sahia Film. Mircea Bunescu, the director ofphotography for many of his films and Horea Murgu also attended.
The masterclass held by Dan Curean was about the possibilities of making more versions starting from the same shooting, exemplifying with his own documentary Gone Wild, and the debate about the Colectiv incident seen from different angles brought together many filmmakers from different TV stations.
The film critic Cristian Tudor Popescumade an application about “Manipulation in the contemporary documentary”, with a Michael Moore production.
The winners list of this edition included feature documentaries and short ones, student films and TV documentaries. The Docuart Trophy was won by Dream Images, by Sorin Luca.
The Bucharest Docuart Fest is organized by Docuart and it is co-financed by the Ministry of Culture through the program Access and by the Romanian CNC, after the financing contests.
Details: docuart.ro
Cinematography: Valeriu Ciubotaru 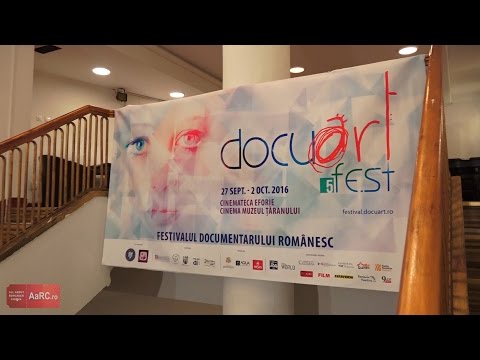