The Romanian Cultural Institute supports again the presence of the Romanian filmmakers at the Berlin International Film Festival. Last year Illegitimate / Ilegitim by Adrian Sitaru had its world premiere there and won the C.I.C.A.E.award in the Forum section. This year we have a film in the official competition, Ana, mon amour, directed by Călin Peter Netzer and the people are looking forward to watching it, after Călin won the Golden Bear with Child`s Pose / Poziția copilului in 2013.
A large part of the film crew members were present at the press conference, where Radu Boroianu, the president of the RCI, was the host of the event. The screenwriters Cezar Paul Bădescu and Iulia Lumânare, the producer Oana Iancu, the cinematographer Andrei Butică, the actors Diana Cavallioti, Mircea Postelnicu and Adrian Titieni spoke about the film and answered the questions asked by the journalists.
The producer Oana Iancu will also be present at the Co-Production Market Berlin with another project, which is in development, The Deer, directed by Bogdan George Apetri.
Tudor Aaron Istodor will be part of the Shooting Stars program, representing Romania, for which he was selected thanks to his acting performance in Fixeur and not only. In 2015/2016 no young actor was chosen from Romania and in 2014 CosminaStratan was in the selection.
Ioana Mischie, one of the six young filmmakers selected for the Berlinale Talents section was also present at the press conference. This is the director`s second participation in this section, where she will try finding collaborations for her projects that are in development.
Iris Lackner, who is a film critic from Israel,was also invited at the event; she spoke about the success of the Romanian films in her country.
Alina Sălcudeanu spoke about the România`s exhibit stand at the 2017 Berlinale.
Cinematography: Valeriu Ciubotaru 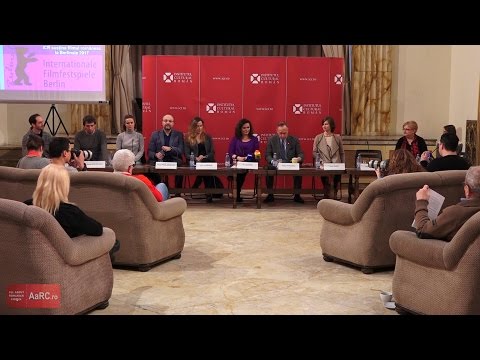