In the summer of celebrating 650 years of documentary attestation of the town by the Danube, “The Romanian Film Caravan – Masterpieces of the national cinema” arrives just in time for the Days of Brăila event. So, from August 12 to 14, in the Monument Park three films will be screened; the films have a connection with the town – actors, or directors or places from here. 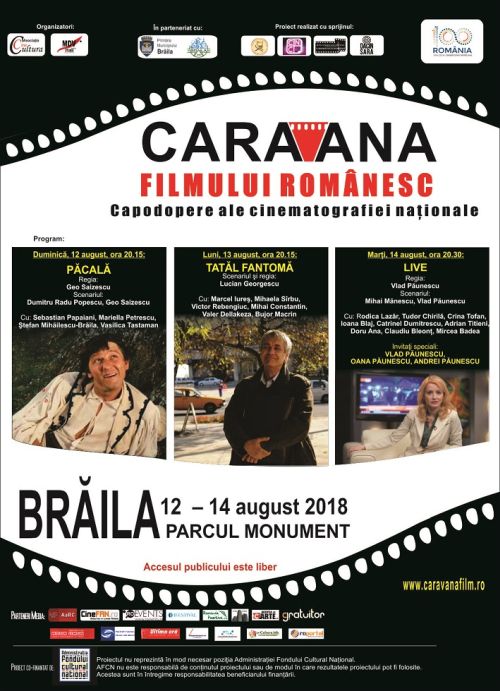 The three films from the programme of the Caravan are: Păcală (directed by Geo Saizescu), The Phantom Father / Tatăl fantomă (directed by Lucian Georgescu) and Live (directed by Vlad Păunescu). The actors Ștefan Mihăilescu-Brăila and Vasilica Tastaman(Păcală) are from Brăila, the same as the director Vlad Păunescu. A few scenes from The Phantom Father were shot in 13 locations in Brăila, among which: str. Cojocari (the former cinema area), around the streets Malului, Pensionatului, Danubiului, Vadul Rizeriei, Impăratul Traian, B-dul Al. I. Cuza, Mihai Eminescu, Petru Maior, the Danube Quay and Traian Square. In this film the late actor Bujor Macrin may also be seen.
The screening of the film Live is followed by a Q7A attended by the special guests of the evening: Vlad, Oana and Andrei Păunescu.
The access is free.
Details: www.caravanafilm.ro