The Romanian Film Caravan Arrives in Ghimbav, in August 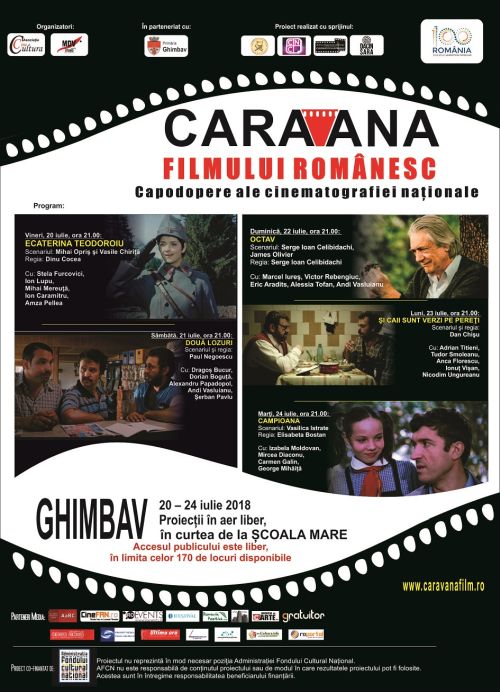 The Caravan opens with the film Ecaterina Teodoroiu (directed by Dinu Cocea). Girl scout and nurse on the battle front, the young girl requested to be accepted to fight after her brothers died during the war. Taken prisoner by the German army, she escaped, she got wounded, then decorated, then she lost her life at 24 years old, in the Mărăşeşti fight, being in command of one of the Romanian platoons that beat back the German offensive in Moldova.
For the second evening Two Lottery Tickets / Două lozuri (directed by Paul Negoescu) is scheduled. The film received the Best Comedy Award at the  Fort Lauderdale Film Festival. The director-screenwriter took his inspiration from I.L.Caragiale`s “Two lottery Tickets”, but he brought the story to the present day. If in the classical short story a clerk thinks that he became rich, but only for a split second until he discovered that the winning numbers are in a different order thah the ones he had on his ticket, in the film produced in 2016 the winning lottery ticket is stolen and the losers start a crazy race in a tired Dacia car, in search of the thief who let them with no luck.
The third screening evening in Ghimbav is dedicated to the memory, with the film Octav, with which the director Serge Ioan Celibidachi made his feature film debut in 2017. Marcel Iureş received many international awards for playing the main character, the old man who returns to the places of his childhood and with nostalgia relives his broken past. A flux of memory caused by his meeting his childhood girlfriend.
Chasing Rainbows / Și caii sunt verzi pe pereți (directed by Dan Chișu) follows parallel stories that intertwine in the end, about the Romanian syndrome of getting rich overnight, with no effort. Tocitu is a petty clerk about to retire who loses his job because he cannot use the computer; and when he tries to catch up with the modern technology, he becomes the victim of virtual charlatanism. Marius is a young man who wins an important award at cigarette tombola, but he cannot claim it because he used a fake name, accidentally Tocitu.
On the 5th evening, the young viewers have the chance to watch The Champion/ Campioana. Two young girls do everything they can to be admitted at the famous Deva gymnastics school, which brought international fame to the Romanian gymnastics. In 1990, 14 years after Nadia Comăneci received that perfect 10 at the Montréal Olympic games, the master of the children films, Elisabeta Bostan, made this film about the will to succeed in sports. And in life.
Details: www.asociatiacultura.ro