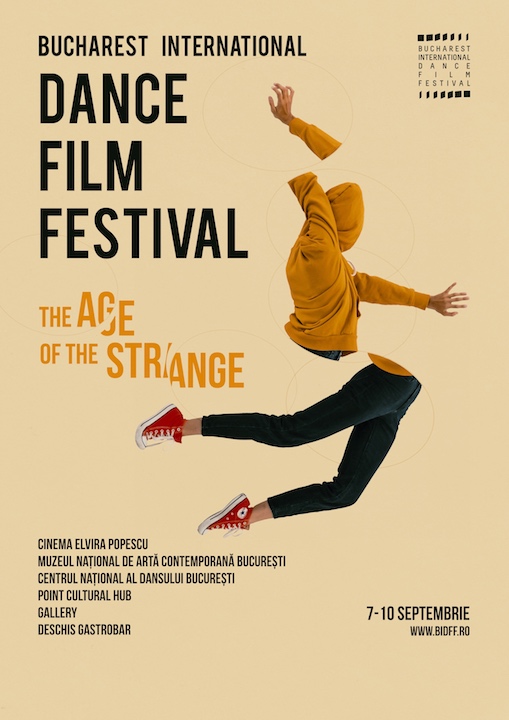 BIDFF 2017 will be held at Cinema Elvire Popesco, at the National Dance Centre Bucharest and at the National Contemporary Art Museum, most of the events being organised at Point Cultural Hub, Gallery and at Deschis Gastrobar.
The theme of BIDFF this year's edition, “The Age of the Strange”, proposes a return to the natural state, searching for “techno-surreal” exposure means, and embracing contradiction and fragility.
The Festival's shorts competition selected twenty films from 14 countries and seven Romanian productions.
This year, a competition section dedicated exclusively to Romanian dance movies is being organised for the first time. The productions will be screened on 8 September, from 21.00, the National Contemporary Art Museum
The foreign titles were chosen from over 300 applications, and are to be screened at Cinema “Elvire Popesco”, on 9 September, starting at 18.30. The screenings will be followed by Q&A sessions with a part of the filmmakers in attendance.
This year's jury is made up of Tomer Heymann, director of Mr. Gaga, that enjoyed a remarkable international success and was presented at BIDFF last year's edition, Mayo Rodriguez, director of Bestias Danzantes Festival of Chile, and Florin Fieroiu, one of the most well-known Romanian choreographers.
The awards will be granted to the Best Film (EUR 1,000), Best Romanian Film (EUR 1,000, offered by the Romanian Cultural Institute), Innovation (EUR 500) and to the Audience Favourite (EUR 500).
Tomer Heymann will deliver a masterclass on 8 September, from 13.00, at Gallery.
Artist Alex Mirutziu will present, also on 8 September, from 19.00 to 22.00, at the National Contemporary Art Museum, the personal exhibition “No blood bank included” and the performance “Dignity to the unsaid”.
Sharon Fridman, a famous Israeli choreographer established in Spain, is the special guest of the third edition of the Bucharest International Dance Film Festival.
The documentary WIM, by Lut Vandekeybus, will be screened during the final day of the Festival, from 17.00, at POINT. Starting from performances, rehearsals, interviews and family archives, Lut Vandekeybus explores his brother's restless creativity – the performer, choreographer and director Wim Vandekeybus – and the ways the family circles are interconnecting, deriving inspiration from and, sometimes, are clashing with his work.
Details at: www.bidff.ro