“Arrest”, in Cinemas from September 20

Arrest, the second feature film signed by Andrei Cohn, will have the Romanian premiere on September 20. The film features Alexandru Papadopol and Iulian Postelnicu, alongside András Hatházi, Liviu Pintileasa, Sorin Cociș and Marian Alexoaia.
In August 1983 the architect Dinu Neagu is, together with his wife and with his two children, on a nudist beach near an industrial area. At one point, two Security men get off a car and take him to Bucharest to give a statement, but they don`t give him many details about it. The story continues in the Militia arrest, where Neagu is kept in the same room, together with Vali, a common-law inmate who is used by the Security as a torturer, in exchange for some favors. Things turn more and more absurd from one day to the other.
“All the films from the Communist period show us as victims, some victims, almost heroes, pretty easy to love, but I don`t remember things to have been like this. We were victims, indeed, but not like those from the Hollywood films. We were that kind of victims you could be ashamed with” Andrei Cohn says in one of his recent interviews. “I made this film more for 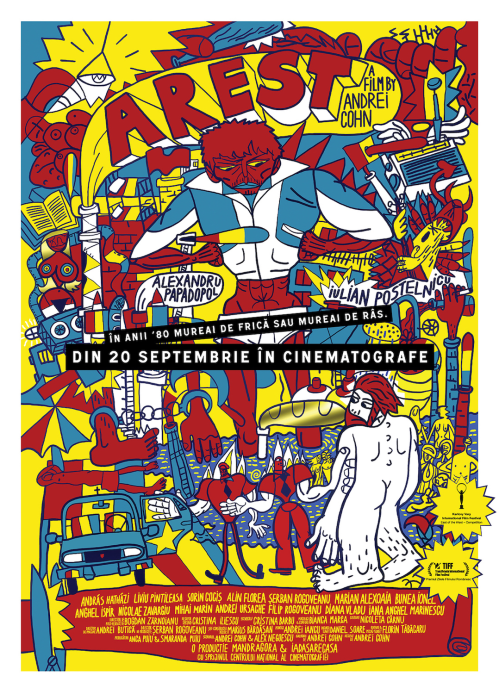 myself, out of a certain anger towards me. It`s not a film about historic facts, but more about my feelings towards the past. I believe the only way to keep going forward is to admit the past the way it really was and to hope next time we`ll be better.”
Arrest had the international premiere during the 54th edition of the Karlovy Vary International Film Festival – East of the West Competition and during this year`s edition of the Transilvania International Film Festival it received Premiul The Romanian Film Days Award for the Best Feature Film.
The film screenplay is signed by Andrei Cohn and Alexandru Negoescu and the dialogues are written by Andrei Cohn.  Andrei Butică is the director of photography and Anca Puiu is the producer. The film was made with the support of the Romanian Film Center and of the Romanian television Society. The film is produced by Mandragora and distributed in Romania by ladasarecasa starting with September 20.
Details: Arest FB