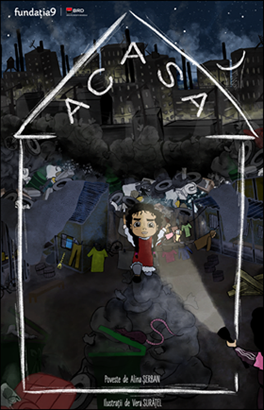 In the times of the pandemic, the actress and director Alina Șerban wrote and coordinated her first cartoon, illustrated by the artist Vera Surățel, suggestively called "Acasă".
Alina Șerban is an actress and writer, the first Roma stage and film director and the filmmaker who represented Romania at the 2018 edition of Cannes with the feature film Alone at My Wedding / Singură la nunta mea. This year she was nominated for the Best Actress award at the German Academy Awards Gala for the part she played in Gypsy Queen, a film which will be released in Romania this autumn.
The cartoon "Acasă" is a project made with the support of Fundația 9, as part of the ”Artists Rooms” project and it is based on Alina Șerban`s personal experience, as an institutionalised young person, after the house she had lived in was demolished in a forced evacuation action of the Mayor House.
Details: Fundația9