Graduate of the Acting Faculty in Tbilisi (class of 1992) and of the University of Theatre and Film in Bucharest "I.L. Caragiale" (class of 1999). 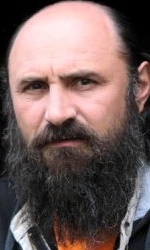