Graduate of the  Dramatic Art Conservatory in Iasi (class of 1950). Assigned to the Municipal Theatre (today’s “L S Bulandra” Theatre) in Bucharest. Was a very appreciated academic at the “I L Caragiale” Institute for Theatre and Film where he acted also as rector between 1981-1985.
“ A profoundly innocent look. An air of guilelessness, pure and honest. A frank, round face. Then, all of a sudden, a new air of unjust offence makes his sweetness collapse all along his entire features, desolate, offended, wronged. These are the weapons with which Octavian Cotescu builds up his characters, mostly treacherous, snaky, shifty, guileful, anyway, far, very far from innocence.

His game is false innocence. His game is to lie to you while looking deeply into your eyes. His game is to play small and frozen, to build his part out of exactly the opposite essence of it. And the results are enormous. His acting skills are infinite. This excellent comedian gave memorable tragic-comic as well as profoundly dramatic film heroes, as Viţu in Bariera of Mircea Mureşan."  (Sanda Faur, Almanah Cinema 1976).
“The actor who invented that undying, encompassing “ youu…” a synthesis of sap self-pride, ferocious vitality, curious irony facing miracles and the inability to subdue the mystery of existence. The melody of that cry is only his, it circulates, it’s a hit! Not many comedians are able to invent a music of their own, out of a syllable, of an exclamation mark!" (Radu Cosaşu, Magazin estival 1977).
”This actor is a mystery, one of those unsolved ones. Because we do speak about mystery when we approach this unbelievable mix of drama, comedy, tenderness, abjection, softness and roughness alike, meek by intention and violent by mistake, seraphic and diabolic in a pot, sweet and perverse…”(Aurel Bădescu, Magazin special Cinema 1978).
“With him nothing is decided, nothing is abiding, on the contrary, his characters slide elegantly from weekness to power (the power of the week), from innocence to foulness, from arrogance to humiliation, from determination to compromise. His major actor’s pleasure is to seek for the shades of this human prototype.."  (Eva Sîrbu, Magazin estival Cinema 1980) 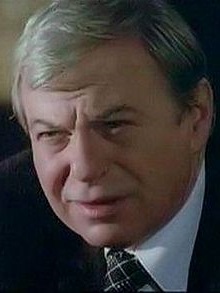