“ When in 1997 she got her diploma for graduating the Superior School of Journalism,  film addiction was already gaining ground with her: the previous year she had been DoP for the coverage Doina and Nicolo and, immediately after, she directed the docu Spiderweb, produced by Libra Film. However , her career didn’t seem to be shaped yet as she was studying Law at the University Dimitrie Cantemir which she graduated in July, 1998.
Her complete dedication to Transylvania International Film Festival in Cluj(TIFF) during which she is omnipresent and hyper efficient, tilts the balance definitively. With only one “deviation” when she works as location manager for Mandragora’s production ,” The Death of Mr Lazarescu” Oana Giurgiu stays as one of the main pillars at Libra Film, contributing as a producer to numerous important films of the 2005-2010 period among which: Lovesick/Tudor Giurgiu/2005, Cross Encounters/Anca Damian/2007, Weddings, Musics and Videotapes/doc/Tudor Giurgiu/2008, The Film Caravan /Titus Muntean/2009/, Somewhere in Palilula/Silviu Purcarete/2010. There’s no secret that film directing is for Oana a challenge for which she’s ready.For now she’s attracted mainly to the documentary, especially the ones tackling the minority ethnicities. She made a first try together with her husband, Tudor Giurgiu in 2008 with Me sem baxtalo?...Am I lucky?...a film that was part of a Phare campaign meant to stop prejudgements about the Roma ethnicity.If that was a made to order doc , the film she is in production with, From Romania to Zion- is a doc conceived by her about the Jews exodus from Romania to Israel starting 1882 towards the end of the last century and also about the relationship between Romanians and Jews. And because she is a strong woman  she will not abandon her producer engagements: the comedy Of Snails and Men by husband Tudor Giurgiu after a screenplay by Ionut Teianu and Child’s Pose by Calin Netzer after a screenplay by Razvan Radulescu.” (Cristina Corciovescu, Aperitiff 2011) 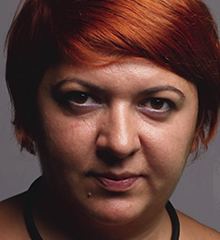