Graduate of the Institute of Theatre and Film "I.L.Caragiale" (class of 1967, prof. Alexandru Finţi). He made his stage debut in a staging of the novel “Pădurea spânzuraţilor"/ “Forest of the Hanged”, done by Marietta Sadova at the State Theatre in Timişoara. He worked for 16 years at the Ploiești Theatre and later on for Teatrul Mic and the National Theatre in Bucharest. He made his film debut in 1973 with a part in Departe de Tiperrary / Far from Tiperrary, but his first leading role was that of the pilot Tudor in Destinaţia Mahmudia (1981). He played the most in Sergiu Nicolaescu and Malvina Urşianu’s films. Member of the teaching staff and Dean of the Hyperion University. Member of the Romanian Filmmakers’ Union (UCIN).
“He’s part of the history of Romanian theatre not only as an actor, but also as a professor. His former students will always use the present tense when talking about Eusebiu Ştefănescu, professor Eusebiu Ştefănescu. They’re young people who were taught by the magister what serenity is. Or what the joy of living in the theatre is. They say he was a real father to them, that he had always encouraged them, especially when they would make mistakes… They say that professor Eusebiu Ştefănescu is their teacher.” (Marina Roman). “Sebi was a pleasant man, a genuine causeur; he would transform any place in a French salon. His backstage charm wasn’t too much speculated in Romanian cinema, holding on to a medallion of the actor. That’s why he took refuge in the ivory tower of poetry… He was the thespian of poetic delirium. He has done the greatest service to Romanian poetry through his recitals, true lessons of poetic hocus-pocus. He would recite like no one else, one after the other, lyrics from Eminescu, Blaga, Arghezi, Topârceanu, Sorescu, Nichita Stănescu and from dozens more authors, whose poems he chose based on their rhythm, their substance, the craftiness of style and on their humor. And he would adapt them according to the place where he would recite them, where he was summoned to bring joy. He adapted them in the manner of the commedia dell’arte." (Grid Modorcea) 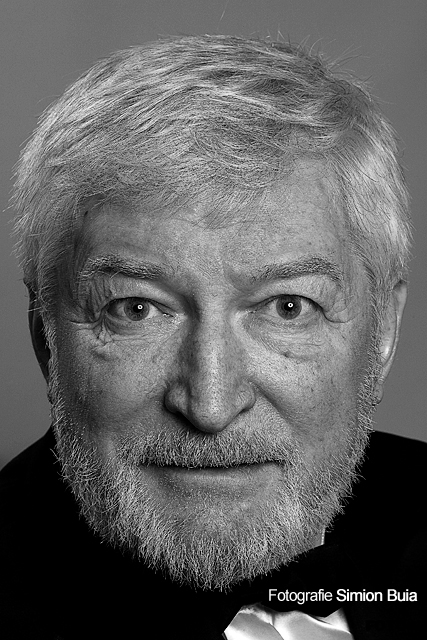