Manager of the theatre company TEEN-ACT from the National College” Petru Rares” in Piatra –Neamt, whose initiator is Erwin Simsenshon (graduate of the UNATC “ I L Caragiale”, Direction Section). She makes her company part of the teen theatre festivals and is a trainer for the other pupils.Graduate of the National University for Theatre and Film”I L Caragiale” in 2007,(class of Ion Cojar,  Adrian Titieni) she is  a colleague of actor  Alexandru Potocean. Plays in telenovelas produced by Media Pro but also in Aurora, Cristi Puiu’s film. In 2010 she leaves for the USA, together with husband actor Bogdan Albulescu. She’s represented by Lily’s Talent Agency  and Stephanie Potakis. She comes back in Romania for the part of the wife in  Adrian Sitaru’s Best Intentions. In 2011 she puts the basis of InLight  Acting School in Bucharest.Together with the school’s pupils and Adrian Sitaru she builds up a film project that will be called Illegitimate. 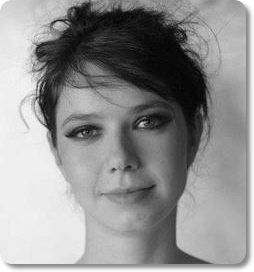