The third Edition of UrbanEye Film Festival will be held in Bucharest, between 16 – 20 November, 2016, at Cinema Elvira Popescu and Cinematheque Eforie. 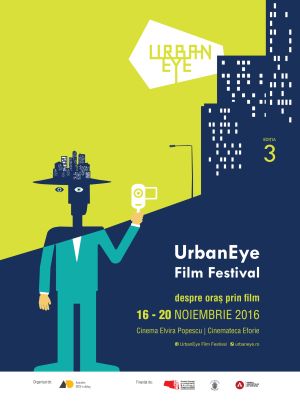 The Festival is to bring on the big screen award-winning documentaries, which approach in various ways themes related to the real-estate environment, to its shaping and to the people inhabiting it. Although produced in other parts of the world, the films to be screened are also relevant for the actual context in Romania, the festival programme also including talks and debated with experts of various professions, who will connect the subjects to the local context.
Within the context of the wars and natural calamities that marked the planet over the latest years, populations were partially and even totally dislocated and a significant part of their cultural heritage was destroyed. Two of the festival themes present perspectives on memory and on the concept of home. Among the features screened as related to these themes, mention should be made of The Destruction of Memory (directed by Tim Slade, USA, 2016), which focuses on an extremely important issue: cultural destruction during wars and their effect on memory and communities, or of A Walnut Tree (directed by Ammar Aziz, Pakistan, 2015), following the story of a Pakistani family from a refugee camp, trapped between an uncertain future and the wish to return home.
If during the latest years' editions, the films presented by UrbanEye laid focus on urban housing means, this year one of the theme approaches another significant urban component, but less discussed: water. This section will also screen the film H2Omx (directed by José Cohen, Lorenzo Hagerman, Mexico, 2013), which investigates the water crisis in one of the world's biggest cities: Mexico City. The them Architect Portraits remains a constant, giving the audience the opportunity to view the film Getting Frank Gehry (directed by A.P. Komen, Karen Murphy, Australia, 2015), telling the controversial story of the first building that architect Frank Gehry raised in Australia.
The festival also has a competition section: films inspired by urbane-architectural realities in Romania are entering this year the race for the UrbanEye Award and will be screened at the festival.
UrbanEye Film Festival is to keep this year as well its educational component: the festival programme includes the workshop “My first documentary film”, dedicated to teenagers and organised together with Vira Association and Komunitas Association, as well as a workshop dedicated to children, organised together with de-a arhitectura.
Details: www.UrbanEye.ro