“Portraits in the Forest” premieres at the Union Cinema


Portrete în pădure / Portraits in the Forest (directed by Dinu Tănase) will premiere on Thursday, March 24, 2017 at 7:00 p.m. at the Union Cinema in Bucharest. 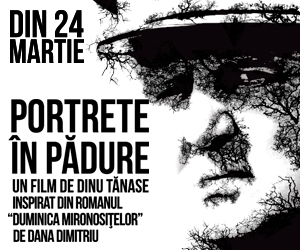 Based on the novel „Duminica mironosițelor” by Dana Dumitriu, the film follows a police officer investigating a crime that takes place in a forest outside a city. The survivor of the attack is under shock and can’t help with the advancement of the investigation.      The mystery of the crime that haunts “the cursed forest”, as the locals call it, and which “seems to engulf all those who step foot in it”, seems impossible to solve. When least expected, the past ruthlessly turns against the police officer. Beyond repair, a senseless and violent act is committed. And yet, despite the burden of his deed, he has to go through with the investigation. The reenactment ends dramatically. Acting both as a defendant and prosecutor, at the edge of the forest that seems to mysteriously summon him, he will have to make a decision.
The cast includes actors: Dan Condurache, Ofelia Popii, Alin State, Şerban Pavlu and Marius Stănescu.
Portrete în pădure is a Casaro film production, made with the support of SRTV and the National Film Center and is distributed by Global Film.
Find out more: Portrete în pădure // Facebook