IDEO IDEIS #13 takes place from August 6 to 12, in Alexandria, under the slogan “How many times did you fail?”. This year`s theme suggests a change of perspective over failure: a professional or personal failure is a chance to know yourself better, to evolve in your career and even to become a better person: Amalia Enache, Ana Ularu, Deliric, Andreea Bădală and Radu Jude got involved in this campaign and spoke publicly about a personal failure in 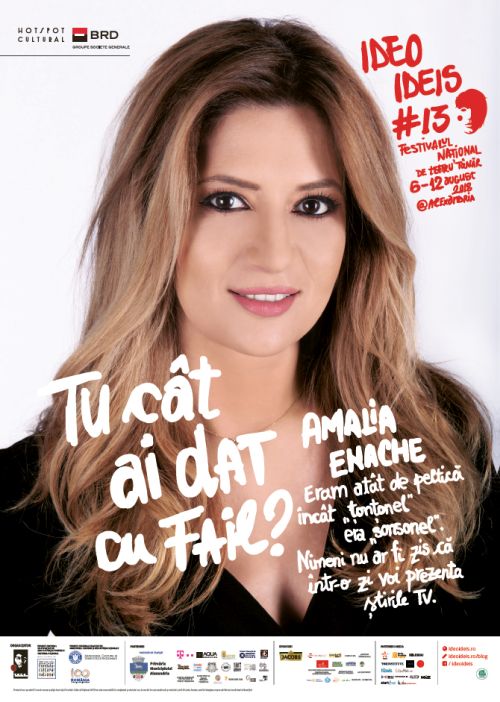 order to send an important message to the high school students about what perseverance means.
“Most often, maybe too often, I was disappointed in myself. I worked a lot with me not to put the blame on me so easily, for so many things anymore. For instance, when I was little I was lisping a lot and now, here I am, presenting the news on TV, and though nobody believed I would succeed in doing it. I was also disappointed in me when I failed getting admitted at the Geography faculty, at the section from which I would have become a tourist guide. For somebody with my results, it looked incomprehensible not to get admitted to college. I didn`t waste my time, I learned all kinds of things, including to give injections.” the journalist Amalia Enache, TV news 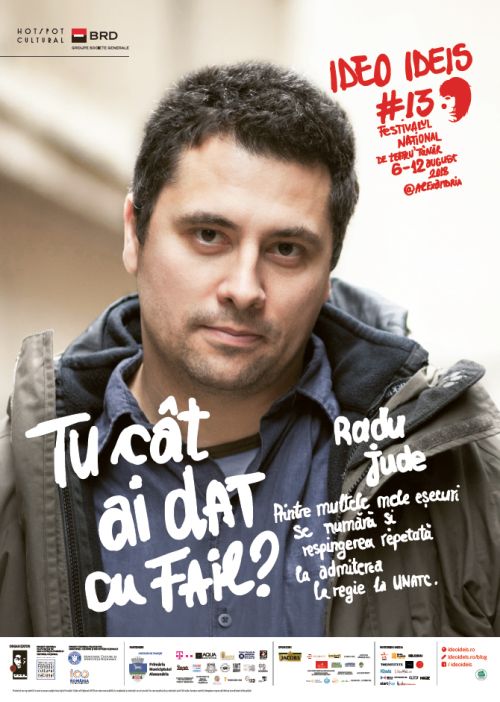 anchor.
We will speak about relating to the failure again on Saturday, August 11, at The Evening of the Storytellers, which will have more speakers than ever: the team of the DoR magazine (Cristian Lupșa, Anca Iosif and Elena Văduva), the former health minister Vlad Voiculescu, the artist Dan Perjovschi and the founders of the Dăruiește Viață Association, Carmen Uscatu and Oana Gheorghiu. Furthermore, the film director Radu Jude and the actor Mihai Bobonete will hold a masterclass on Friday, August 10, moderated by Cătălin Ștefănescu.
For an entire week, the inhabitants of the Alexandria town and the visitors will be able to watch 17 theatre performances (8 professional ones and 9 young amateur ones) and the center of the town will be permanently animated with street shows and concerts of the band Fanfara Transilvania. This year the Late Cinematheque will screen again the most interesting Romanian and European films of the year. One Step behind the Seraphim / Un pas în urma serafimilor (directed by Daniel Sandu) and Several Conversations About a Very Tall Girl / Câteva conversații despre o fată foarte înaltă (directed by Bogdan Th. Olteanu), are two Romanian debut films that feature young actors who in the previous years took part in the IDEO IDEIS.
Besides the professional theatre performances that were invited, all the events in the festival have free access, upon seats availability.
Each group of the Young Theatre Shows has a mentor who gives them not only a proper feedback, but also guidance in a larger cultural sense. The mentors of the 13th edition are: Dorina Chiriac, Marius Manole, Medeea Marinescu, Ofelia Popii, Cătălin Ștefănescu, Andi Vasluianu, Vlad Zamfirescu and Alexandru Papadopol, who will attend the IDEO IDEIS festival for the first time.
ART&PLAY is the section of communitarian development of IDEO IDEIS, which was created for the inhabitants of Alexandria. During each day of the festival the children and their parents of Alexandria can attend workshops of personal development, counseling, cinema, philosophy and community theatre. The participation to these workshops is free, upon seats availability, following the order of submission.
Details : Program