The SEECS Short Film Festival continues this year as well. The 5th edition is again hosted by the “I.L.Caragiale” UNATC and it is organized with the support of the Romanian Filmmakers Union (UCIN). 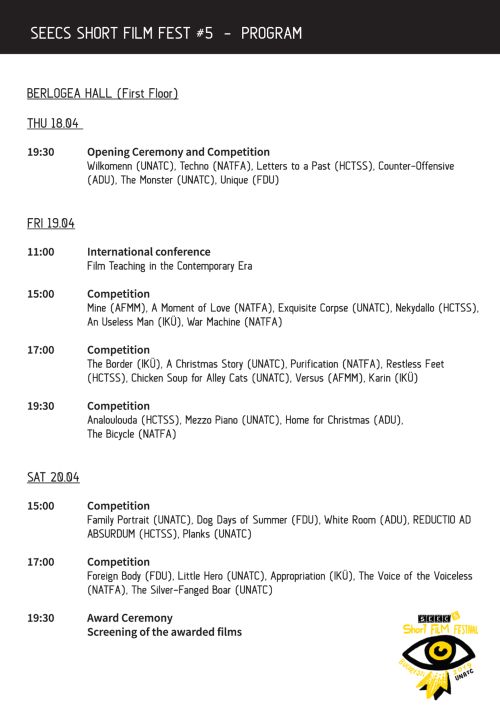 SEECS Short Film Festival is an initiative of SEECS – the South-East European Cinema Schools Association, starting with 2015. The festival addresses both the professionals (students, professors, film and theatre critics, film and art professionals) and the large audience interested in good quality films. 2019 is the second year in a row, when SEECS is present in Romania at the “I.L.Caragiale” UNATC.
The official opening of the festival takes place on April 18, at 19:30, in the I.Berlogea Hall (UNATC – Matei Voievod street, no.75-77, sector 2). Right after the opening, the student film competition will start. The screenings will continue on April 19 and 20, in the same I.Berlogea Hall, starting with 15:00.
The access is free, upon seats availability.
On April 19, at 11:00, the same hall will host an international conference dedicated to the film education in the present cultural, artistic and social context.
SEECS (South-East European Cinema Schools) is an organization which includes the most important schools in our region, all of them are full members of the CILECT (the World Organization of the film and television schools): Albania (The Academy of Film and Multimedia “Marubi”), Bulgaria (National Academy of Theatre and Film Arts), Greece (Hellenic Film and TV School), Serbia (Faculty of Dramatic Arts), Turkey (Istanbul Kultur University), Croatia (Academy of Dramatic Art), Romania (UNATC “I.L. Caragiale”).
On the evening of April 20, starting with 19:30, the awards gala will take place in the same I.Berlogea hall.
The jury is made of: Manuela Cernat (Romania) – film critic, university professor at  UNATC “I.L. Caragiale”, main researcher at the “George Oprescu” Institute of Arts History and president of SEECS from 2008 to 2012,  Sophia Georgiadou (Greece) – program coordinator at the Short Film Festival in Drama, specialist in the Balkan film, Bulent Kucukerdogan (Turkey) – film professor at the Gaziantep University in Tukey, the founder of  SEECS Short Film Fest and president of the association from 2012 - 2016.
Details: SEECS Short Film Festival FB