In the shadow of a murder: “Portraits in the forest” – film review

Out of a psychological novel hidden under the mask of a police investigation, as the novel written by Dana Dumitriu, “The Sunday of the Myrrhbearing Women” was perceived when it was published (in 1977), Dinu Tănase made a policier built in the shadow of the psychology. A stubborn shadow, hard to cast away, as long as we entered the realm of a writer well-known for her vocation for the psychological realism, named and 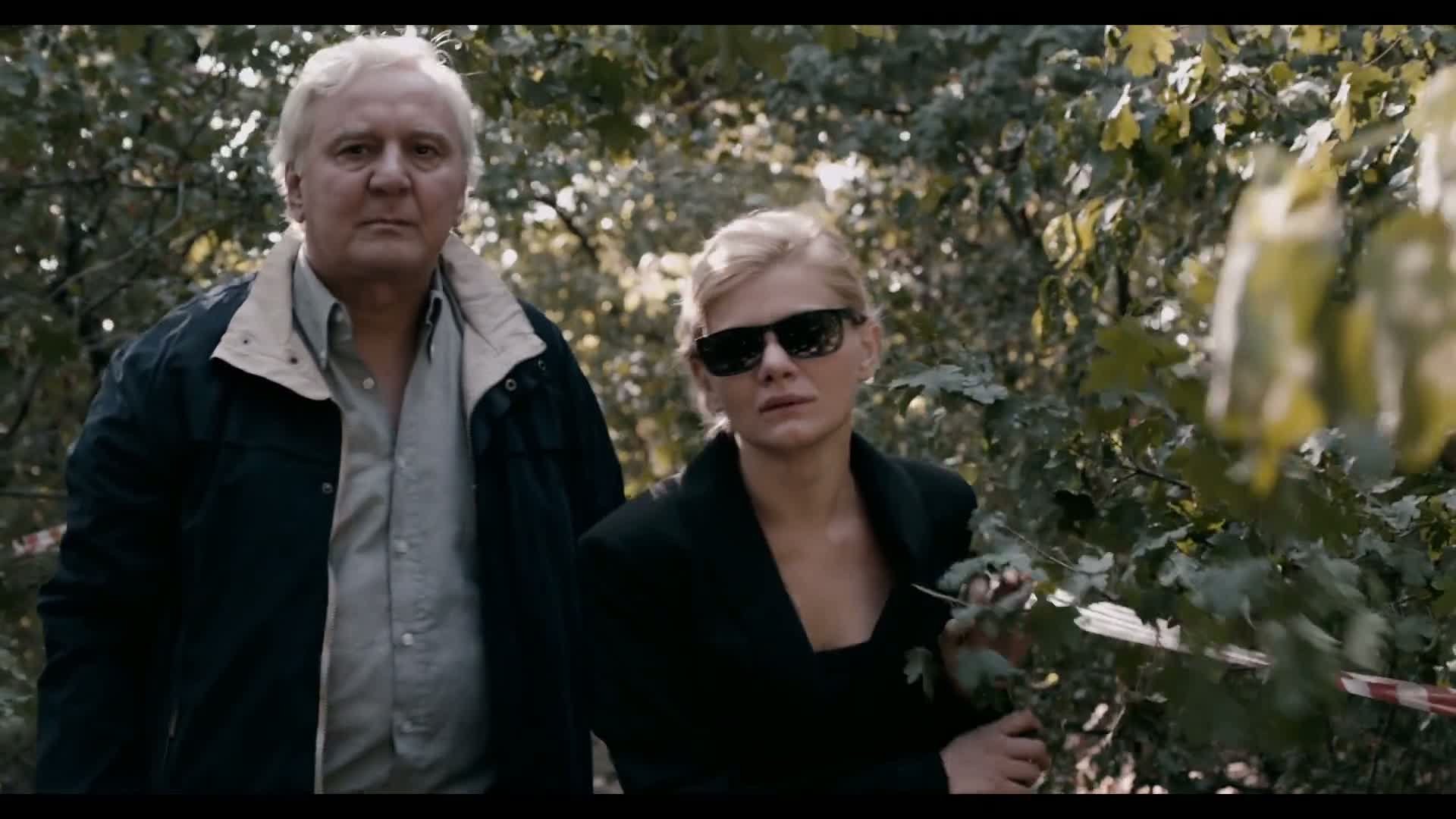 theorized by her. Out of a novel that belongs to a woman novelist, whose pages, up to a certain moment (marked by the impressive epic cycle, Price Ghyka) are incontestably dominated by the female characters, the filmmaker chose a male character  for the foreground of the film Portraits in the Forest / Portrete în pădure. On his way from the book to the big screen the hero lost his name; now he is simply called the Commissar. Along the way we will understand why especially with the help of the actor Dan Condurache`s acting: he captures our attention like a magnet, from the very beginning when we see him arrive at the crime scene in the forest. In the first scenes he moves like in a trance; there is an uneasiness about him that is felt even when he fires away an ironical question, “who saw the murderers?” 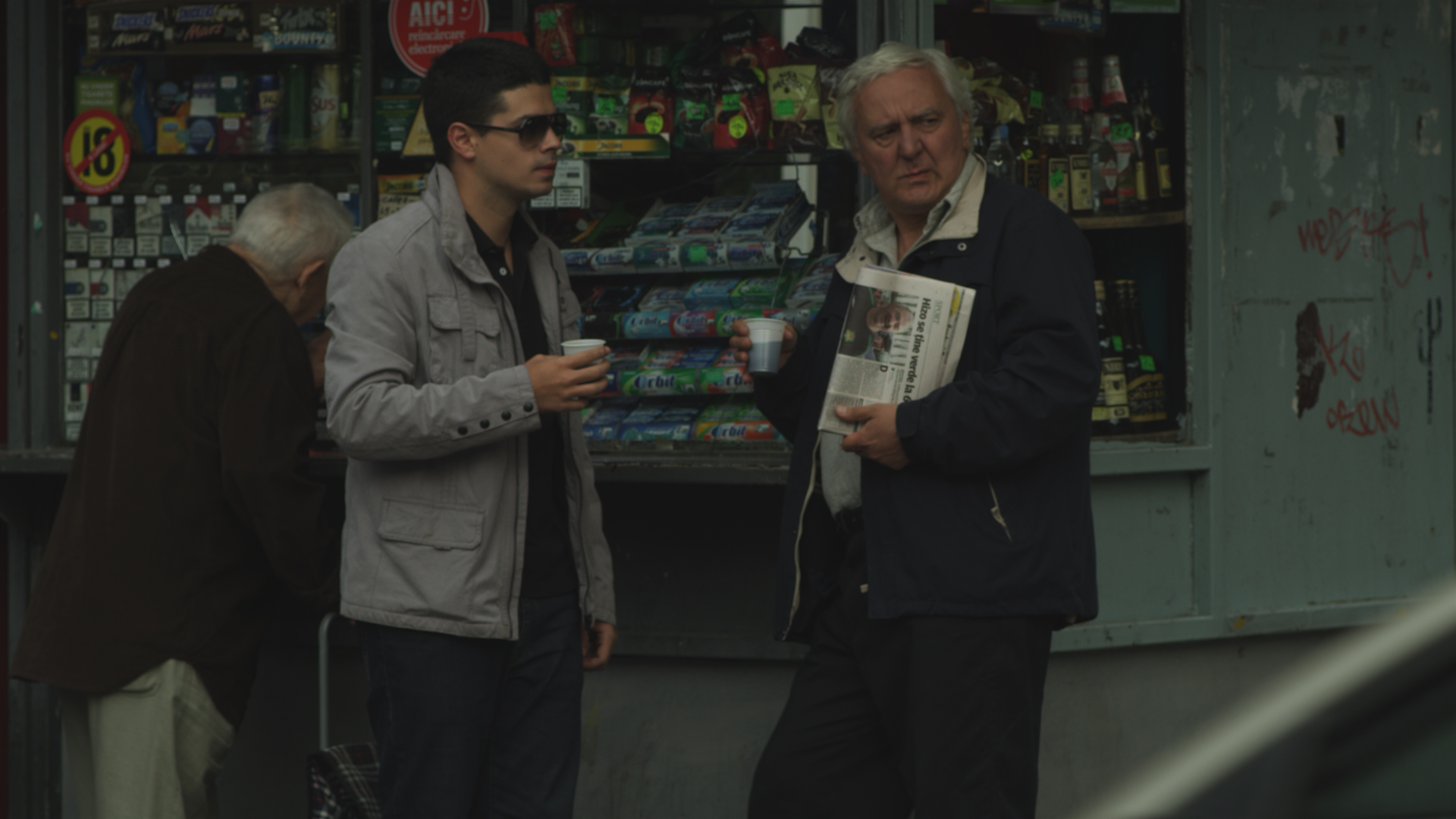 It is interesting to notice our filmmakers` recent ambition to approach a literature which is difficult to defeat with the arms of the film, even when the process bears the name of “based on”. There is a certain alertness of the book, a startle in front of the intrusions (see “Scarred Hearts”). I think that Dinu Tănase`s manoeuvre of making the police side the background of a dramatic biography – of the Commissar in this case – suggested by several flashbacks, allusions of the other people, was a productive one; it actually is the one that maintains the emotion level. Otherwise, if we had been left only in front of the possible seduction of the multiple lines of the storyline of this genre, of the re-enactment of a case, some of the questions appeared along the investigation would have puzzled us even more. 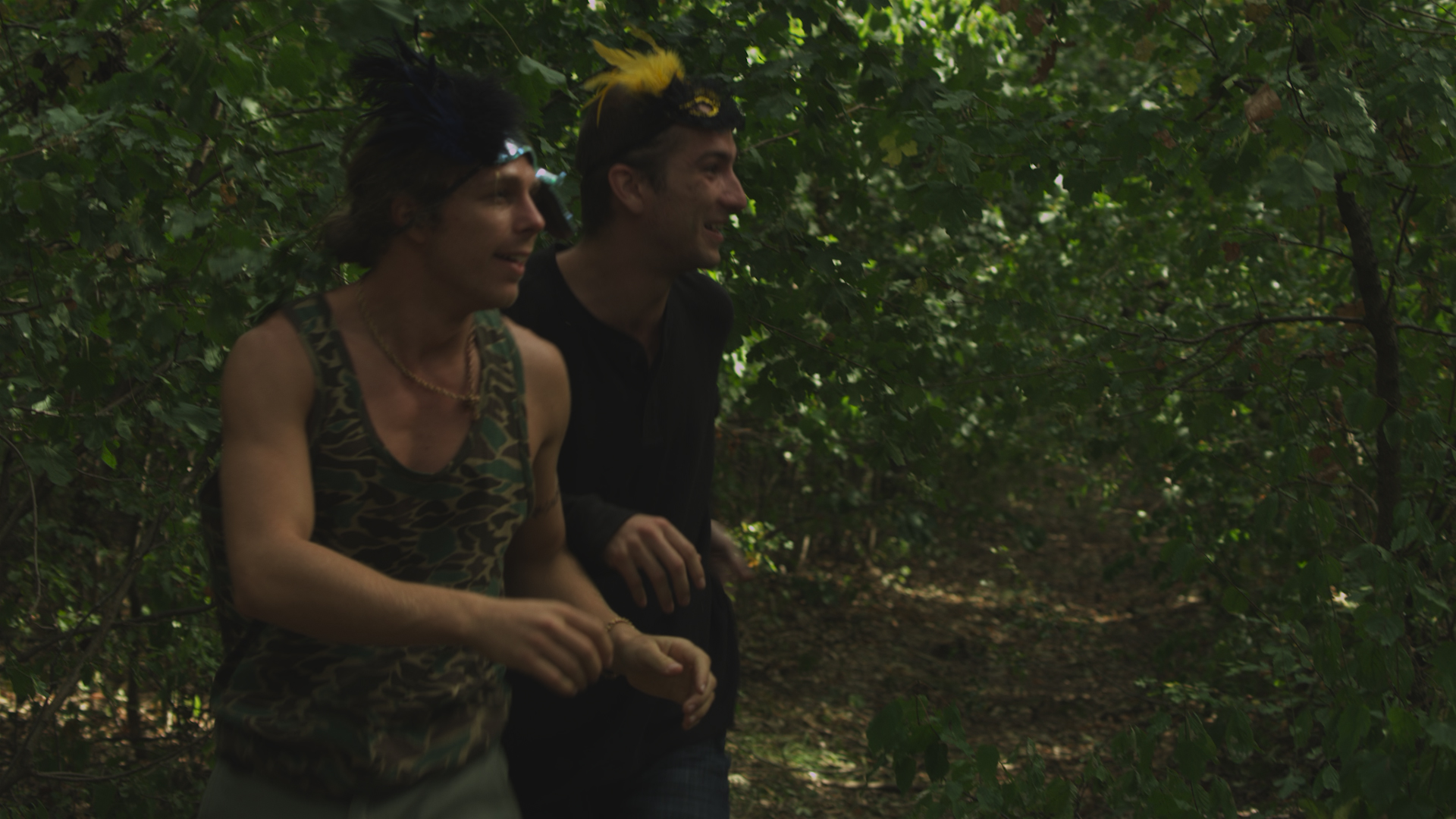 Vera (Ofelia Popii), the heroine, the wife of the man who was killed beside her, seems a bit nervous, then desperate, if not hysterical and that is about everything; but the confession that the distinguished mother-in-law (Simona Bondoc) made, could take us thinking about a domestic misunderstanding: “If my son got along well with his wife? Now I realize that I know nothing about these small things. Somebody came in the middle of the forest and fulfilled my old premonition.” A wave of fog, confused pieces of the matrix-story of the novel, the failure of a couple. Just as vague reminiscences of the bewildering changes of perspective from the book, the flash-backs seem, until the final re-enactment of the murder, with the two criminals, a kind of wasters, clown-like disguised, who were out in the woods, searching for “gallant adventures” – one of them is frightening (Alin State) and the other one is too talkative (Lari Georgescu). From his biography of a pretentious sad sack we get to find out a few things from Mrs.Romanescu, his mother, a former Miss, now in decrepitude (Camelia Zorlescu, who is an excellent interpreter of small memorable characters). The Commissar won`t refrain from letting her know in 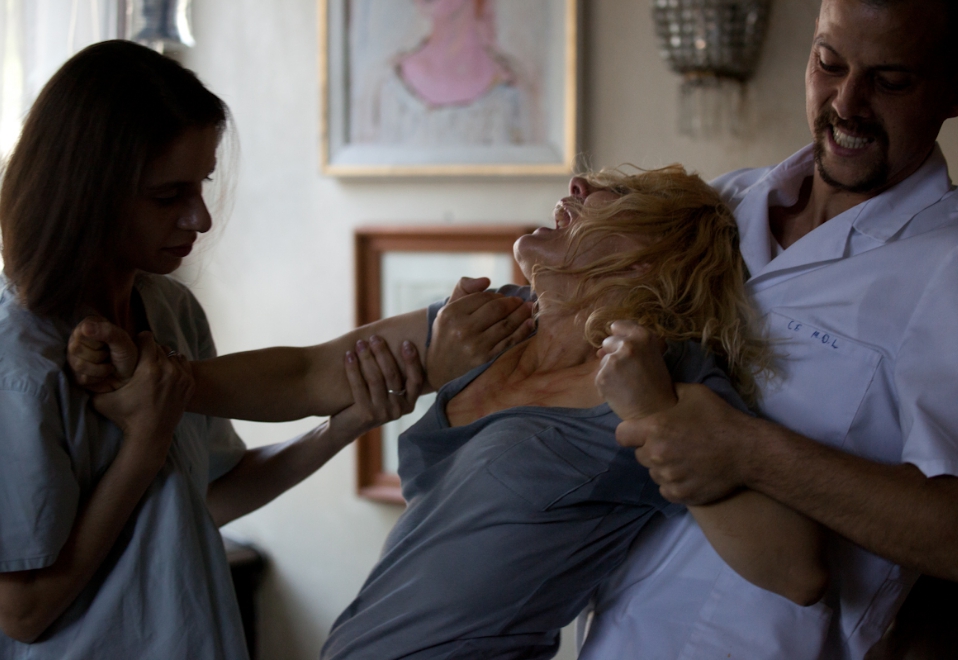 his ironic style: “Your son stabbed a peaceful man.” A literary commentator assumed that the reader who got caught in the entanglement of the analysis of a sentimental void could be rewarded with the police story. I like to believe that in the film the proportions are reversed. The viewer has enough reasons to keep not the entanglement of a policier confused here and there, bu with the images of that biography dramatically suggested of the Commissar with no name, the above mentioned character. All kinds of suspicions float 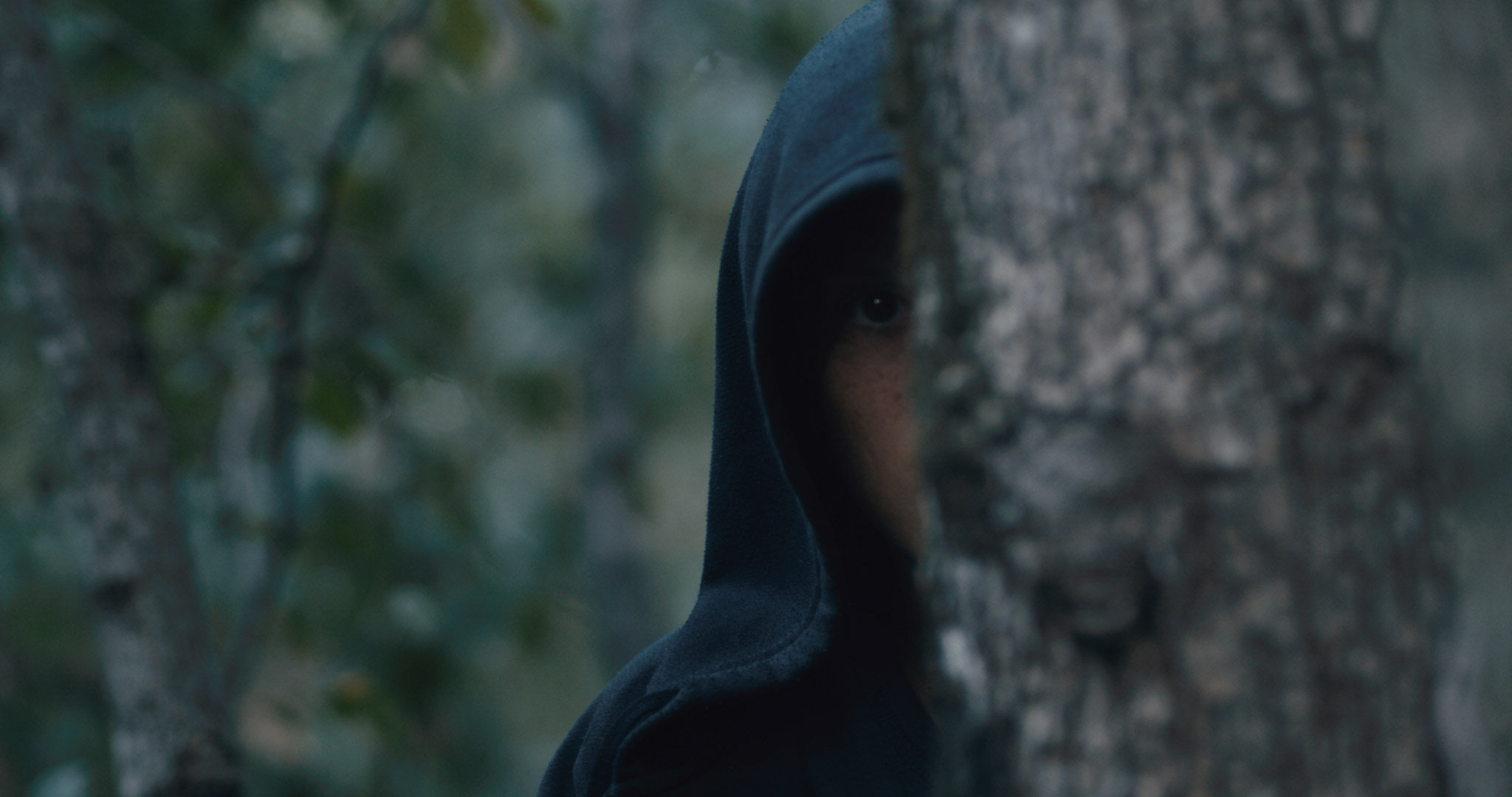 around him, first of all a total mistrust in the human being called woman. At the crime scene he has no evident reasons to suspect the dead man`s wife, but still, he speaks about “a woman with no heart”. I bet – he tells a young collaborator – these are the prints of her high heels…lipstick stains, Nina Ricci perfume…” The exaggerated enumeration – was he really familiar with all the perfumes? – comes from who knows what memory he had. We are well beyond the second half of the film, when we are thrown the truth in our face. A former colleague says: “he was called the Wolf, because of the way he looked at his suspects. He devoured them with his eyes. If it hadn`t been for that story with his wretched wife, he would have reached very far.” The story was an adultery. We see it mentally re-enacted with all the details seen by the cheated one. He didn`t reach far anymore. He was pleased with small things, he remained an investigator of small cases. Instead, he was left with a disgust with life, bitterly disguised; these violent impulses will be fatal to him, a call of death. In fact, the going towards the forest, in the end, seen from the car ( a good collaboration with the cinematographer Pătru Păunescu) and accompanied by the music poured drop by drop by Cari Tibor leads to that point. Counting on the careful viewer, with a good memory, Dinu Tănase sleeps from the very beginning the passing image - as a lightning – of a hooded man, near a tree. A watch that could belong to an angel of death, because he is the same one that the protagonist will lose himself with, in the forest. No need for the prosaic “Come with me”.