“Heidi”, in Cinemas, Starting with Friday 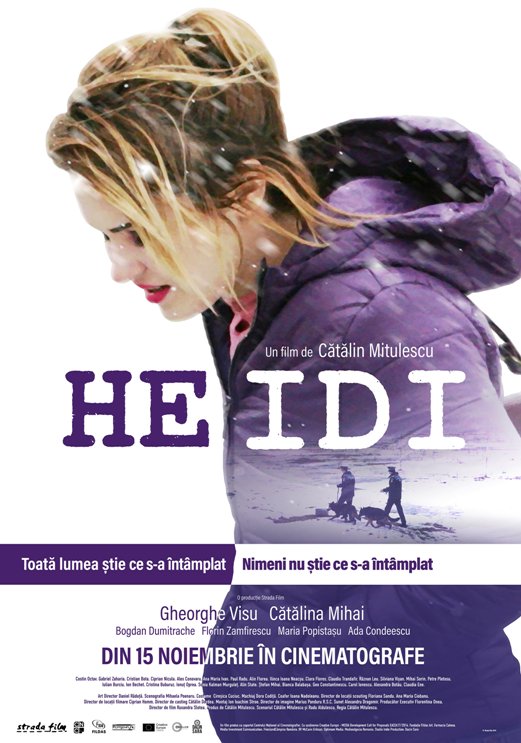 Mihai Vișoiu, a police officer on the verge of retirement, is given the mission to find two prostitutes who are willing to testify in an organized crime case, in an area that he`s known all his life. One of them cannot be found, but Heidi, a Moldavian girl from the mountains, falls into his hands quite quickly. The difficult part starts only when Old Mișu must go beyond all limits to convince her to collaborate.
“I am interested in a world in which the good and the bad are not as they seem; and even if the policemen have some rules, a manual, Vișoiu, after being an agent in the outskirts his entire life, gets vulnerable when he wants to help Heidi. What happens between them becomes more important than the rules they need to follow and none of them is aware of what demon they woke up. I wanted to place this story at the beginning of spring, when the snow melts in the outskirts of Bucharest. It is a moment when not many things seem to happen and still…,” Cătălin Mitulescu says.
The film also features: Bogdan Dumitrache, Florin Zamfirescu, Ada Condeescu, Maria Popistașu, Cristian Bota, Ciprian Nicula, Alex Conovaru, Ana Maria Ivan, Paul Radu, Alin Florea, Ilinca Ioana Neacșu, Clara Flores, Claudiu Trandafir.
Cătălin Mitulescu`s fourth feaeture film had the world premiere in the official selection of the 25th edition of the Sarajevo International Film festival and it is distributed in Romania by Strada Film International.
The screenplay is written by Cătălin Mitulescu and Radu Aldulescu, the cinematography is signed by Marius Panduru RSC, the editing by Ion Ioachim Stroe and the sound by Alexandru Dragomir. The executive producer is Florentina Onea.