On February 15 and 16, from 19:00, the 3G Színház Theatre of Târgu Mureș will host the screenings of some renown documentaries from the Astra Film Festival. 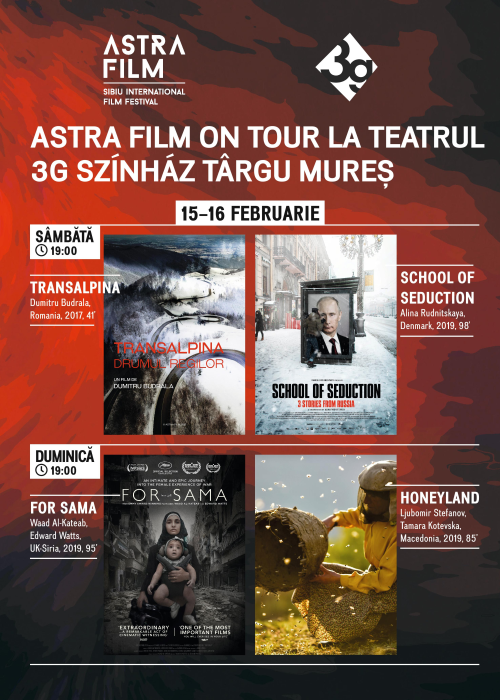 On Saturday, February 15, the films Transalpina – The Road of Kings / Transalpina - Drumul regilor and School of seduction will be screened.
Transalpina – The Road of Kings describes the complex history of the roadway that reaches the highest altitude in Romania, connecting – in an impressive and spiritual way – Transilvania with Walachia.
School of Seduction tells the story of three women from present Russia, who take up a course which teaches “how to seduce rich men”. The film shows what being a woman in Putin`s Russia means, what happiness is and how important patriarchy still is. The film was nominated for the Best International Documentary Award at the Zurich Film Festival.
On Sunday, February 16, the documentaries For Sama and Honeyland will be screened. For Sama is a shocking, authentic account of the war in Syria, made by the director, while raising her daughter amidst the bombs dropped from the planes. The film won more international awards and this year it received the Bafta Award for the Best Documentary. Honeyland is a film about a beekeeper from a village in Macedonia, who is confronted with the presence of a nomad family which endangers her quiet life and despises her teaching. It is the first non-fiction film in the history which in the same year is nominated at the Oscars both for the Best Documentary category and for the Best International Feature Film.
Astra Film festival reached its 27th edition. The new edition will take place from October 19 to 25, in Sibiu. The online submission platform is already open, for the projects made in 2019-2020. The deadline is March 2, 2020.
The festival will continue to travel around the country and it will soon get to Cluj and Bucharest. Keeping the tradition of the previous years, every Thursday, from 19:00, the films can also be seen on the big screen of the Astra Film Cinema in Sibiu.
AFF on Tour in Bucharest is organized by Astra Film – CNM Astra Sibiu, the Sibiu County Council, the Romanian Cultural Institute and the National Peasant Museum.
Details: www.astrafilm.ro