Documentaries, debates and Costică Acsinte exhibition at the Festival “Collected from the Balkans”


The second edition of “Culese din Balkani” (Collected from the Balkans) Documentary Film Festival awaits the audience from Friday to Sunday (4 – 6 November) with over 30 documentary film screenings, debates with anthropologists, ethnologists and directors, Tzuica Day, and exhibition of Costică Acsinte collection, with tours through the Image Archives of the Farmers Museum and many other events. 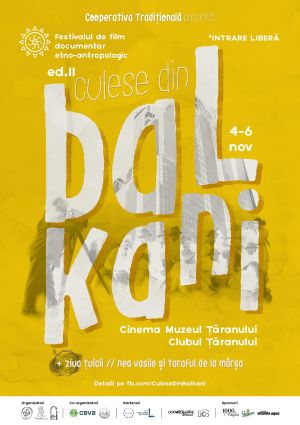 The festival will be held at the Farmers Museum Cinema and at the Farmers Club, admission being free of charge.
Nea Vasile and the Folk Band from Mârșa will bring the festival's second edition to a close with a party at the Farmers Club.
The films are divided into theme sections. AntRO is a section dedicated to Romanian documentary film directors who took visual anthropology and/or ethnography studies, or to foreign anthropologists who made films in Romania. Most of the films in this section were made as part of the research programmes developed by the universities where they studied.
Balkanica is the international section screening films from Greece, Serbia, Macedonia, the Czech Republic, Bosnia and Herzegovina, Kosovo, Albania and Bulgaria. Special Manakia is dedicated to 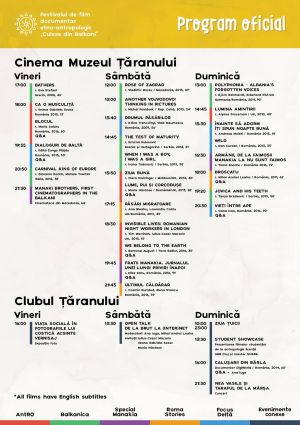 Manakia brothers, Balkans' photography and film pioneers, Focus Delta will present documentaries shot in the Danube Delta, and Roma Stories is a section including three films with three different approaches on the stories of the Roma community in Romania.

21:30 - Manaki Brothers. First cinematographers in the Balkans
Cinematheque of Macedonia, 64'

13:30 - 15:30 - STUDENT SHOWCASE
Presentation of films by students majoring in visual anthropology with Babeş-Bolyai University of Cluj-Napoca and master degree studies at SNSPA of Bucharest

21:30 – Concert performed by Nea Vasile and the Folk Band from Mârșa