With Love, About the Freedom to Choose: ”Illegitimate” – film review


I know that from here, from our world, from the core of the cinema world, you cannot follow Magritte`s steps, he who went against the grain with the realism of the photographic image, warning us with a child-like handwriting, under a famous painting “Ceci n`es pas une pipe” (“This is not a pipe”). The surrealist artist saw us as the victims of the “Treachery of images”, we take them for granted, so to speak, while they are mere signs. It is not a pipe, we cannot fill it with tobacco, we can`t smoke with it, etc. Many times, upon finishing watching a film, I found myself thinking of Magritte when from the imbroglio of multiple betrayals that are specific to the cinema (the meaning of the images, the word don`t always reach their destination and not from their fault), here comes a possible assertion: “this is not a film about…” Here`s a good up to date example: “Illegitimate is not a film about incest”. The rolling of the narrative which seems to come together right under our eyes will take us there as well, after leaving behind a small oasis of touching philosophical quarrel in the family, that insensibly is put an end to by the aggressiveness of some accusations. I say “insensibly” because the film has the flow, the fluidity of a Jazz jamming session. God has never forgotten Sitaru enclosed within a formula. Hooked (Pescuit sportiv), Best Intentions (Din dragoste, cu cele mai bune intenții), Domestic showed us different angles of looking. This time a few notes were enough and each participant picked up the harmony and made it his/her own. 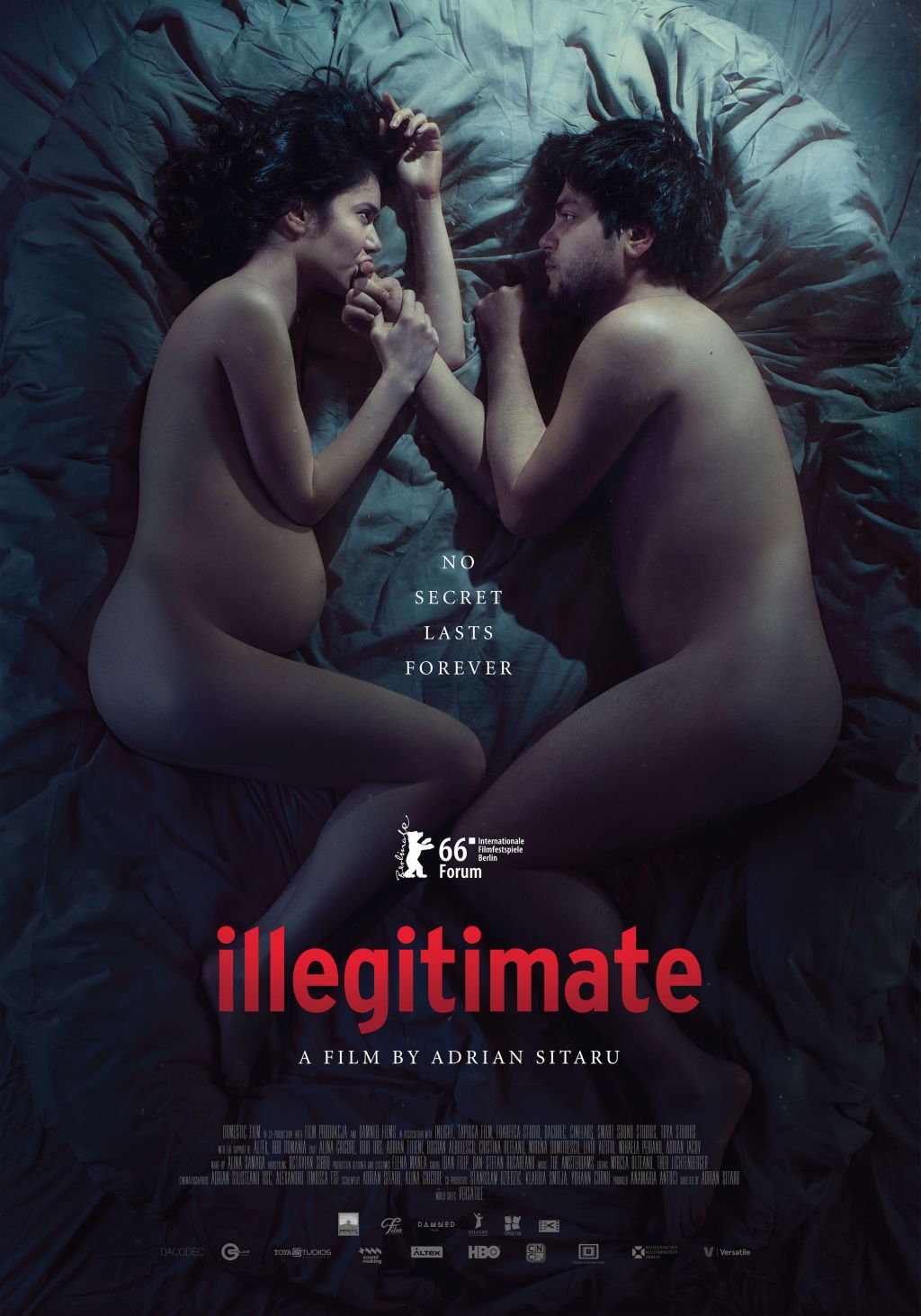 The director, Alina Grigore – co-screenwriter and the actors confessed having improvised a lot. But only they know the restlessness of finding the right tone, so that from this apparent easiness the film may be born. Some of the filmmakers of the French New Wave asserted that for such creations it wouldn`t have been wrong to tell that “the topic is the mise-en-scène itself”. We can see the body of the film taking shape, surrounded by that translucent l`air de rien of the director construction that was so dear to Truffaut. We let ourselves get carried away by the rhythm, by the volutes of this style ( Adrian Silișteanu and Alexandru Timoșca ar the two directors of photography), until a drum beat brings us to the ground. Gathered around a family table (a real topos of our New Cinema), the four children of the gynecologist Victor Anghelescu (a widowed man), the twins Sașa and Romi, Cosma, the eldest son, who is a doctor himself, Gilda with her possible future husband and another young woman, Julie (about whom we`ll find out later that she was raised since she was little in the same house), they all listen to the father`s relaxed peroration about the all-powerfulness of Time, about the insubstantial psychological time, throwing in arguments from Pythagoras, Platoon, etc. He enjoys himself, you can easily tell. Adrian Titieni admirably conveys the relaxation and self-conceit. The members of the clan take part in it, in their personal way. Young Sașa, the ruffle one (Alina Grigore) has the charm of the impertinence, of the restlessness, Cosma (Bogdan Albulescu) is more the quiet type, he seems to have the balance by his side, the patience to listen and ponder. The frenzy of talking around the table is ruined by the sudden question of one of those that were present, Julie, who had found some information on the internet regarding dr.Victor Anghelescu, who, during the communist age seemed to have been one of those who denounced the women who were determined to have an abortion. Is it true? Far from eating humble pie, the man has his own theory. Refusing the abortion, he “did something good and noble, he saved a few lives. From glorifying the Time we pass on to the evocation of the unmercifulness of the present days. The children don`t want to listen about it. There`s only one question left, beyond any evoked possible extenuating circumstance. Was their father an informer, or not? From the shaken family portrait, the youngest daughter Sașa, the small panther ready to attack and the mellow Cosma stand out. They both defend the total freedom of their choices, the right of life. With so many painful words floating in the air, with the father`s grim resistance, the film leaves the casualty of its tone. They start a fight and as a final argument but also as an ultimate revenge, the pater familias gives them a merciless: “If you really want to know, your mother wanted to have an abortion”, addressed more to the two twins, Sașa and Romi. From this moment on, the theme of the twins will represent the core of the film. At first, the story had been slightly whispered: the girl who is next to the driver (Cosma), turns suddenly to her brother, without considering anything else. There is an urgency of their complicity that we`ll probably notice at the family reunion. There are a few tiny notes which intensify with the image of the two of them feeling lazy in their adjacent beds kept from their childhood or of them playing the four hands piano on the tablet, with the image of the two of them isolated, with the door locked. A small background that prepares the incest towards which the two of them drift, just like the mother and son from Malle`s Le soufflé au Coeur, they don`t just throw themselves into it torn by an unstoppable passion. 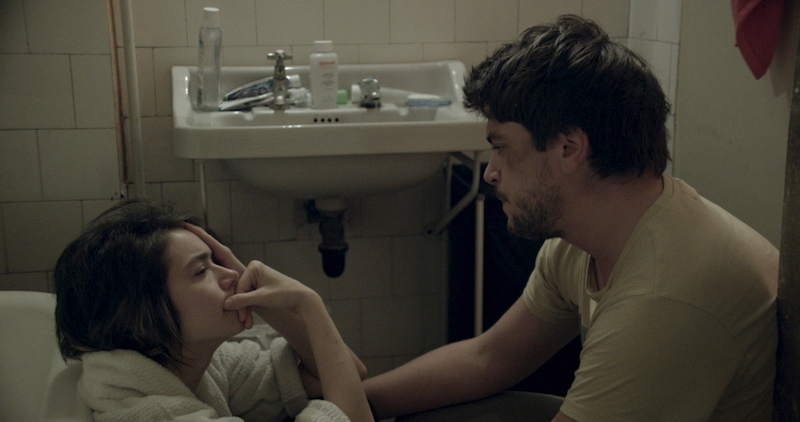 That is why when Sașa wants to put an end to it, Romi is against it. The boy defends what he thinks it is, a love like any other, with innocent arguments: “In Northern Europe, incest is legal.” The entire interrogative potential of the film feeds now from the characters` reactions to what the family members get to experience. The narrative structure favours the protagonists of the dispute on abortion from the beginning: the father and the youngest daughter. The first seems to be hammer-headed, but not as much as not to admit - in the name of an almighty social hypocrisy - the possibility of a physical attraction between brothers, in other words the incest, but not its aftermath: a child. Sașa, the once uncompromising one, shifts the dispute towards talking about having the right to do what she wants with her body and now she rushes into making an abortion. Cosma, the wise brother supports her: he even wants to help her, It was much easier to speak about the sacrosanct freedom to choose, without interfering with the bringing onto the world as long as the one involved is the other, as long as the freedom to choose is still a theoretical concept. When they thrust you in their circle of fire, the asnwers sound differently. How? We don`t get them from the film Illegitimate and we didn`t expect that either. We didn`t take as a possible answer the euphorical final scene, which was built not in the way of the paychological realism, but following a long breathing pause, a cesura, if I may use a literary term. Sașa, almost due to give birth (in her eighth month), the young happy father-brother, surrounded by the smiling family gathered around the table guarded by a radiant father who wisent up, ready to praise Time that is a healer, a gift from God. We don`t know how it is possible to have so much peace now. Unless everything is the projection of an angel who passed by.