On the occasion of the third edition of the American Independent Film Festival (April 12-18, 2019), the Cinemascop Association, with the support of HBO Europe, organizes a screenplay contest named: Write a Screenplay for… 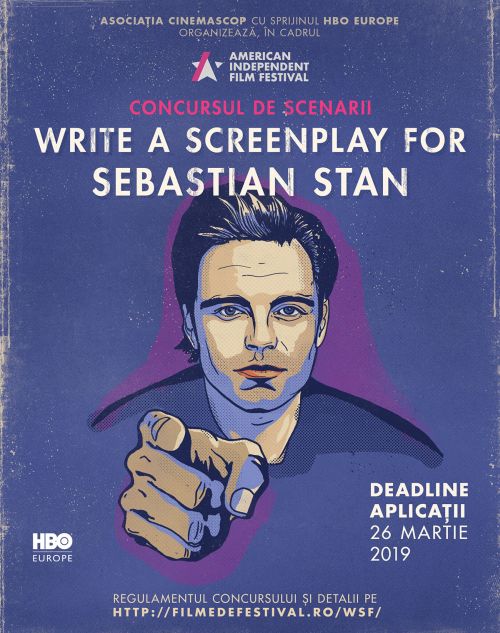 Until March 26, 2019, screenwriters who write in Romanian, experimented or beginners, are waited to send their proposals to info@cinemascop.eu. The screenplay contest implies the writing of an outline for the Romanian-born actor, Sebastian Stan.
The outlines can be written for feature films, or for a 6-episodes TV mini-series. A jury made of specialists will analyze all the applications and will choose the finalist projects on April 8, 2019.
The authors of the finalist projects are invited to take part in a developing workshop, from April 10 to 17, 2019, which will be in Bucharest; during the workshop, their projects will be developed with the support of some script doctors.
The finalist projects will be analyzed by a panel of specialists together with Sebastian Stan and they will choose the projects that they believe that can be developed as screenplays. On April 18, 2019, the winning projects will be publicly announced.
HBO Europe and the Cinemascop Association will support the developing of the chosen projects until they become screenplays.
Founded in 2017, American Independent Film Festival returns in 2019 with its third edition and it presents a selection of recent independent American production, released in the circuit of the great film festivals in the world, such as Sundance, Cannes, New York, Tribecca, Telluride, Toronto, Venice, alongside retrospective sections, screenings and special events.
Details: Regulament concurs