“Cărturan”, on the Big Screens, Starting with November 8

Cărturan, Liviu Săndulescu`s  directorial feature debut , will have the national premiere on November 8 and it can be seen in cinemas in 21 cities and towna all over the country: Bucharest, Arad, Bacău, Baia Mare, Botoșani, Brăila, Cluj, Constanța, Craiova, Deva, Galați, Iași, Piatra Neamț, Pitești, Ploiești, Severin, Suceava, Târgu Jiu, Târgu Mureș, Timișoara and Vâlcea.
Cărturan is produced by Mandragora and it is distributed by ladasarecasa. “It is a very emotional film, extremely cautiously led by Liviu, a story with which you cannot but empathize and which will let you with a few questions at the end, that you need to find your own answer to.” Anca Puiu, the film producer said. The film features Teodor Corban, Adrian Titieni, 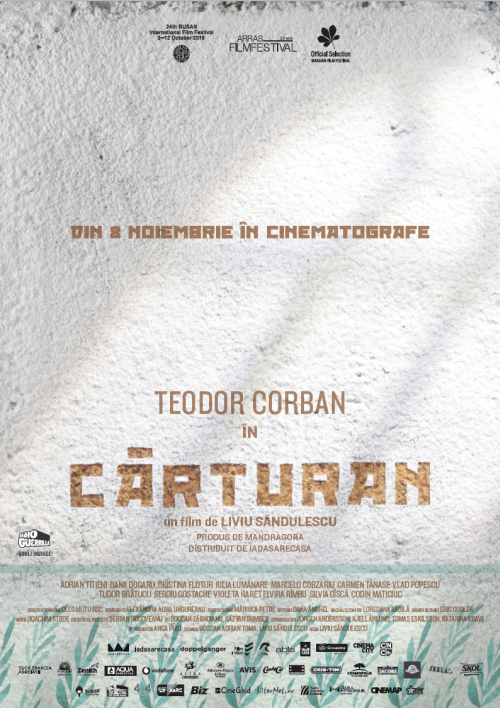 Dana Dogaru, Cristina Flutur, Marcelo Cobzariu and Carmen Tănase and the children Vlad Popescu and Tudor Brătucu.
The life of Cărturan, a 60 y.o. man is turned upside down when he finds out that because of a terminal illness that he had had no idea of, he has little time to live. His situation is more complicated because he has to take care of his 14 y.o. grandson. While still alive, the man needs to solve two very important things: finding a good place for his grandson to live until he`ll be able to take care of himself on his own and organizing a memorial service for his soul. This is a habit which is common in the area he comes from, but he`ll bring him to conflict with the village priest, who has a different opinion on the Christian practice. When he realizes that things aren`t going the right direction, Cărturan is forced to make some sudden choices.
“There is also a religious side at stake about this film, but the most important one is the human one. It is a film which shows us the way people find themselves in different religions, beliefs or superstitions, each of them with their principles about life and death.” Liviu Săndulescu said.
Cărturan had the world premiere in Busan, South Korea, the European one in Warsaw and it continues its festivals journey by being in the selection of the ARRAS Film Festival, France.
The screenplay is signed by Bogdan Adrian Toma and Liviu Săndulescu and the cinematography by Oleg Mutu. the film producer is Anca Puiu.
Cărturan is a Romanian (Mandragora, Iadasarecasa) - Sweden (Film I Vast, Doppelganger AB) co-production, with the support of the Romanian Film Centre, the Romanian Television, Dacin Sara, Cinema City Romania and Shoot&Post Auditory Sweden.
Details: Cărturan FB