Starting with three years ago, the films awarded at theDocuart Documentary Film Festival are screened in different towns in Romania, thanks to the program Docuart Caravan. The initiative is the more important, the fewer the chances to watch a documentary in a cinema are, on a big screen and to get to ask questions to their directors.
The 2016 Docuart Caravan  will be in Brașov, first. Then it will go to Vălenii de Munte, Târgu Jiu, Baia Mare, Cluj Napoca, Timișoara and Iași. The filmmakers will attend the q&a session following the screening of their films.
The documentaries travelling with the caravan are: Românești, directed by Artur Borusz (Best Directing and Editing, in the Student Section), Brudina, directed by Dragoș Mihai Hanciu (Best Cinematography in the Student Section), Călușarii din Bârla, directed by Adriana Oprea (Best Documentary for television), Passport for Germany (Pașaport de Germania), directed by Răzvan Georgescu (Best Directing), Outside (Afară), directed by Andrei Schwartz  (Best Cinematography), Aliyah DaDa, directed by Oana Giurgiu (Best Editing), The Little Golden Robot (Roboțelul de aur), directed by Mihai Dragolea and Radu Mocanu (The 2015 Docuart Trophy)
In Brașov the caravan was organized with the support of the Mayor House and took place at the Cinemateca Patria, which is part of a cultural center. The film lovers from Brașov – including its new citizens, the director Laura Căpățână-Juller and the actor Gabriel Spahiu – came to meet Mihai Dragolea and Radu Mocanu, the directors of the documentary The Little Golden Robot and Oana Giurgiu, the director of the feature length documentary Alyiah DaDa. The film critic Anca Grădinariu, who was part of the selection team for the Docuart Festival was also present. Daniela Apostol, the director of the Docuart Association led the q&a sessions. Cinematography: Valeriu Ciubotaru 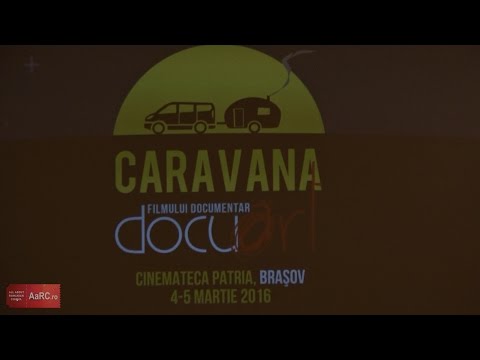