If things go like this, if Porumboiu intended to make a documentary about a certain story someone had told him, about a possible treasure buried in a yard and then stopped and went back to what we just watched, means that once again, fiction humiliates reality. I wouldn`t say, as a French colleague did, that the actual fact screams with joy; I would rather say that it`s getting smaller, withdraws a few steps, giving more space 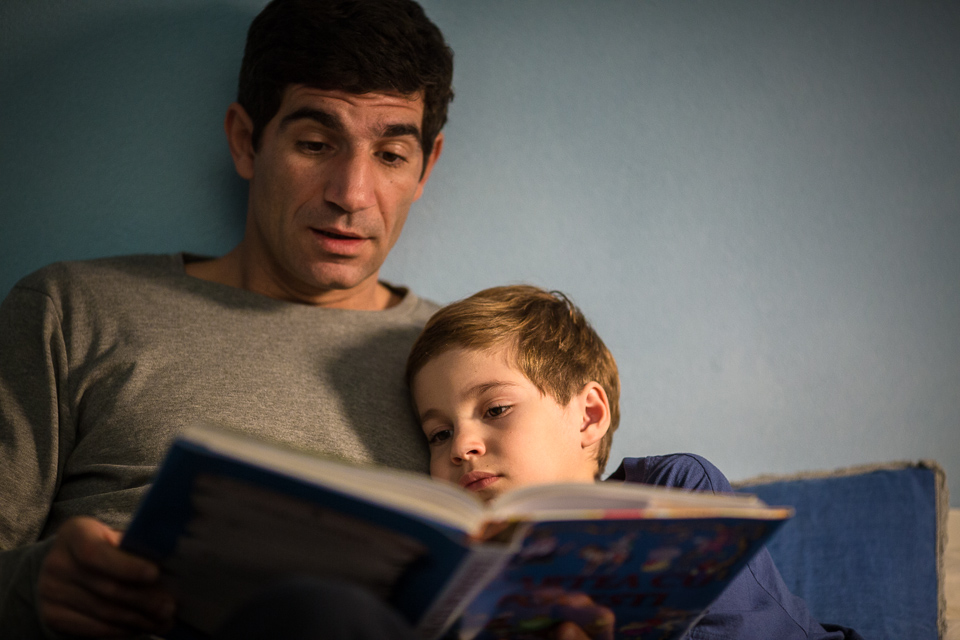 to the metaphor, so that, later on, just like an animal watching  its prey, it may attack freely. In a way, it`s a principle dear to Corneliu Porumboiu, especially the one in Police, Adjective, that I believe The Treasure has the strongest connection with. In the first one – we had the waiting; in this film – we have the searching.
In both films, at their end, we reach a point that we wouldn`t have expected, by any means. Costi (Cuzin Toma) is a father that doesn`t want to disappoint his son, who is at the age of the bedtime stories. The kid knows that his dad may not be Robin Hood (from whose adventures his father often reads to him), but he knows that he keeps his promise. And the little boy`s trust will be rewarded in the end. In between those two covers you can find just about everything that goes along with us in life: illusions, the phantasma of the future, the phantom of the past, the protection of the mediocre daily routine. And there is something else that fits here: the cinema. With its powers to change something completely, to feed itself out of the sadness of the little things, to bury the history and to unbury it instantaneously. We barely know anything about our man, Costi, the walls of the house he lives in together with his wife and their little boy are quite empty and they`re cut only by the horizontal of the sofa line. Your eyes don`t meet anything to cling to, they are left to float around on an undisturbed surface, just like in the sequence with the discussion with Adrian, the neighbor (Adrian Purcărescu). He is in the tight corner and he came to borrow some money and after a short while of thinking, he came back to tell the detailed story of a treasure hidden in the courtyard of his parents` house in Islaz.
Their talking is projected against a wall (I remembered the famous white spaces behind the characters` backs from Elio Petri`s films), in a patient fixed camera frame. The nudity of the setting will be rewarded by the moving of the action in the space of the assumed, mysterious treasure, in the courtyard where the green chaos of the herbs and weeds almost covered the walls of the house left abandoned. There is a rustle, some restlessness wandering about that young wood that grew unbothered, but we are not left to think too much of how time takes its toll. The metal detecting specialist (Corneliu Cozmei), hired by Cristi, breaks the silence with his noisy machinery that squeals in a funny way every time there is a vague possibility of getting close to ferrous or non-ferrous metals; the only competition it has is an instrument which is a bit more up to date, an electronic device which is carried over that piece of land, in an exasperating low speed. The calmness of the man gets on everyone`s nerves. The restlessness increases as the evening falls on Islaz, that`s right, the same place where the famous 1848 Proclamation took place. This is a detail that Costi`s wife (Cristina Toma) - a know-it-all kind of a wife, like most of the wives from Porumboiu`s films – didn`t neglect to take into consideration in a short, hysterically funny historical summoning, which is very similar to the song text analysis in Police, Adjective.
The treasure doesn`t seem to let itself be found, but history makes its way through small details about Adrian`s family and about its changes. Right where they dig a brickyard used to be; later on, the house was nationalized, then taken back, turned into a club or a night club, until it was deserted. Between two shovelfuls, history creeps in, layer by layer.”Somewhere between farse and mild irony, Porumboiu remakes the portrait of the modern Romania”, Juliern Gester, from “Libération” wrote; he is one of the many foreign journalists from Cannes, who understood the substance of our filmmaker`s film, without being bemused by the little games of a Godard from the bygone days (the book page as big as the whole screen, the reading from the computer, etc). And by the time the treasure does appear (as Mercedes shares deposits) from a hole they`ve been digging until the middle of the night, the three men have gone through all the emotions that are specific to this kind of adventure: they have been tense, annoyed, distrustful, sick and tired, accusing one another; the one that was the most self-possessed was the specialist with the detector, who anyway, had nothing to win or lose. The non-professional actor Corneliu Cozmei was excellent, a natural-born actor; he made such a good impression on the “Le Monde” journalists that they dedicated him a small portrait.
Dettached from the agitation of the other two men, without expecting a possible bigger reward, he does his job with a vaguely arrogant condescendence. In regard to him our neighbours define themselves as well; the differences between them are marked by the way they take possession of the treasure. The French critics used a word with double meaning, butin, which means prey, in this case it may be the pirates` prey. In fact, the review from “Libération” was called "Le trésor", enfants de butin, which is an expression from the children` stories. In order not to disappoint his son who loves this kind of bedtime stories, Costi buys loads of jewels, “this one and that one”, that he arranges in the rusty box. In other words, he invents a treasure, by the book. For the children`s sake, for the one of the story? There`s a sentimental touch, unusual for Porumboiu, that floats over the end of a film that has been worked on mathematically, with sudden cuts from the shaking of which you can hardly pull yourself back together.