Old Luxurious Flat Located in an Ultra-Central, Desirable Neighborhood is an adaptation of the short story „Are These Actual Miles?” written by Raymond Carver, that Sebastian Mihăilescu directed during his Master`s studies in film directing at the UNATC „I.L. Caragiale” in Bucharest.
The film is about Radu (IulianPostelnicu) and Ioana (Maria Popistașu), a middle class couple from Bucharest, who try to keep their relationship alive, while losing the material comfort once the economic crisis gets worse. Ioana goes to see an old friend from the faculty, to whom she wants to sell the car, while Radu is waiting for her at home, anxious to see the outcome of that meeting.
The film was selected in the national competition of the 2016 NexT International Short Film Festival. On that occasion we met Sebastian Mihăilescu and Eduard Pârvu (the cinematographer) who told us many detailed things about the film concept, about the way they worked with the actors and about the projects they are working on at the time. 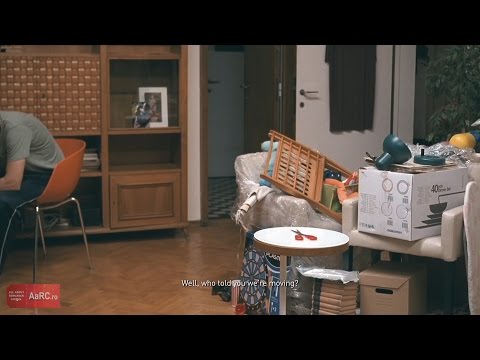