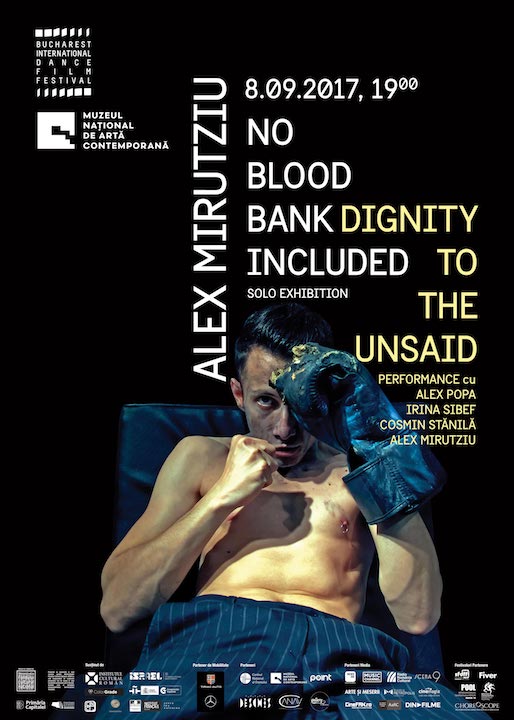 The opening of the exhibition and the performance will take place on 8 September, from 19.00 to 22.00, at the National Contemporary Art Museum (MNAC). MNAC will also host the screening of the Romanian films selected in this year's national competition of the festival.
“The works displayed at the exhibition cannot be taken frontally, either visually or multi-sensorial, but only through a detour with slow digestion, which may consume, even lose one. My latest works are outside the «me» - here — «the rest» - logic and focus upon issues on uncertain dimensions that coagulate one meaning or the other, as well as upon the co-existence relations between multiple present-days, perspectives or appearances of the individual and of the world where it is thrown, which can never be exhausted”, the artist stated.
“Dignity to the unsaid” will be performed by Alex Popa, Irina Sibef and Cosmin Stănilă. The performance is commissioned by BIDFF and set up in partnership with the Performative Art Programmed of the Bucharest National Contemporary Art Museum, with the support of SABOT Gallery. The music is signed by Elias Merino and Alex Mirutziu.
“I intend to research the methods through which one of the most important writers of the 20th Century - Iris Murdoch – managed to create a meaning through an abundance of meanings, said and unsaid, and I named such significances – ways to rule the world. The conceptual movement between said and unsaid is influenced by the ever-present fragmentation we manifest when we look at the world as «something similar to», a fatal aspect of our physical boundaries. We fragment the world so that we can understand it and function in it,” Mirutziu explained.
Born in Sibiu, Alex Mirutziu had personal exhibitions in Zürich, Los Angeles, München and Cluj-Napoca. Furthermore, he delivered presentations on performance and theatre at prestigious institutions, such as Royal College of Arts (England), Von Kraal Theatre (Estonia), IASPIS (Sweden), and collaborated with artists and writers - Grit Hachmeister (Germany), Paul Devens (Holland), Elias Merino (Estonia), Graham Foust (USA), Asa Jungnelius (Sweden) and Graham Harman (USA).
The third edition of Bucharest International Dance Film Festival will be held between 7 - 10 September 2017.
Details at: www.bidff.ro