The teenagers who are passionate about films will get together in Bucharest (from June 7 to June 10), where film screenings will take place at the Eforie Cinematheque and the usual art exhibition at the Case 101. Though it is organized almost entirely by teenagers, Super! encourages the people of all ages to come attend the event. 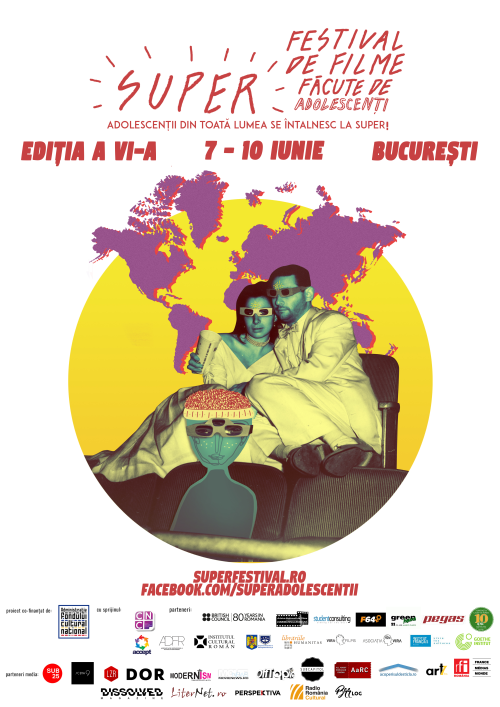 “This year we received over 1,000 films from over 70 countries and we are anxious to watch together the selected ones, on the big screen. The short films focus on different themes, from relationships and daily events to strange encounters and the search of the meaning of life”, the organizers say.
Besides preparing the festival, this year the Super! team organized the first poetry workshop, as well as film, photography and creative writing workshops.
This year, the festival was represented in other 18 cities in the country and in Moldavia by over 20 Super! ambassadors, who organized film screenings and workshops.

Tuesday, June 5 (from 20:00) – “Superchapter: Video Poems” - at Macaz - bar, theatre (pre-festival event).
Thursday, June 7 (from 19:00) – the opening of the art exhibition "Lost & Found”.
Friday, June 8 (from 18:00) –  we open the festival with the screenings of the films in the International Competition 1
From 20:30 – Competition: Romania and Moldova.
Saturday, June 9 (from 15:00) – National Competition 2;
From 20:30 – International Competition 2.
Sunday, June 10 (from 18:00) – Incidental Politics: Special screening with “political” films;
From 20:30 – Closing Gala + Festival Friends: Screening of films made in projects that are friends with the festival (Super 2017 Film Workshop, Super Pitch, workshops of the Vira Association, Let’s Go Digital).
The Super 2018 parties will take place after the film screenings.
More details can be found on the festival facebook page.
Details: www.superfestival.ro