The no.1/2019 issue of the “Film” magazine, published by the Romanian Filmmakers Union, makes reference in the Editorial to the returning of the normal rhythm of the film world: “after the cold months, which almost lacked Romanian premieres and festivals, we are invited, summoned to take part in many interesting events, which unfortunately are scheduled at the same time, more or less.” 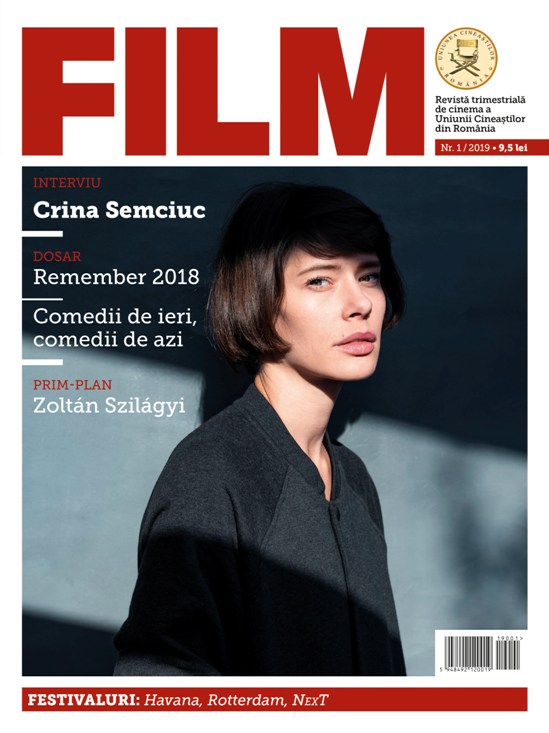 With all the pressure of the recent festivals and premieres, this issue of the magazine dedicates an important number of pages to evaluating the Romanian productions of last year, in the “Remember 2018” column. Ten film critics from different generations try to put a diagnosis as lucid as possible to the present state of the Romanian cinema, making note of the accelerated diversification, the setting apart from the radical realism and the integration of the genre conventions. Most of the participants also assert the more and more important role the women filmmakers play in the film creation and in the film industry as well.
Though the authors note the delayed release of the film which received the Golden Bear last year - Touch Me Not directed by Adina Pintilie – the starting of the  national release tour is warmly saluted. The tour is accompanied by the debates “The politics of the body”, about the standards of normality, intimacy and sexuality, which were attended by the film crew members.
In his column “Jurnal”, Laurenţiu Damian offers us a study about the relation between Lucian Pintilie`s film creation and the theatre one. “Evocation…always too late” reveals the underlying connections between “The Cherry Orchard” theatre performance and the film An Unforgettable Summer / O vară de neuitat.
This issue also includes a dossier dedicated to comedy – “Yesterday`s comedies, today`s comedies” – this genre preferred by the audience is more and more present on the list of the recent film premieres. in the “Interferences” column, Anca Ioniţă analyzes in her article “The use of the camera in the theatre performance, a new naturalism” the more and more significant presence of the film elements in the theatre performances in Romania.
The interviews of this edition bring forth the filmmaker Zoltán Szilágyi, the leader of our animated film field of the `80s and the actress Crina Semciuc. The other columns are present as well – “Film review”, “Film book”, “Rediscoveries”, “cinema hall”.
The authors signing articles in this issue are: Dana Duma, Marilena Ilieşiu, Laurenţiu Damian, Mihai Fulger, Angelo Mitchievici, Titus Vîjeu, Doru Pop, Ioan-Pavel Azap, Luminiţa Comşa, Dinu-Ioan Nicula, Irina Trocan, Georgiana Muşat, Andreea Pătru, Liri Chapelan, Marian Sorin Rădulescu.