Synopsis: Adaptation of the eponymous novel by Nicolae Mărgeanu.

Actors’ opinion
„Maiorul Vigu is an important character in my artistic career.
I tried to personify Vigu as a man governed by reason as well as by passion: he isn’t simply carrying out «a work-related task». For him each case demands full commitment and, particulary, emotional commitment. The more Vigu – a man who doesn’t launch accusations, but one who casts away doubts -  gets closer to solving the case, the more his accusations become ridden with regret; underneath his words, his gestures, one can guess at all times the sadness of the one who always uncovers ugliness, murder…
Meeting David Reu meant more than just a collaboration, it was an act of joy working with this director, who under no circumstance did he make me see him as a rookie – a distinctive awareness of life, of details, a lucid sense of observation and skill at gathering the entire crew around him.
I think the end result will turn out as we all hope it will!”  (Octavian Cotescu, Film brochure)

“I’ve read Mărgeanu’s book a couple of years ago; as I was turning one page after the other, Onu the painter seemed more and more like a character I’d like to play. I was always interested in that category of ambiguous heroes who wander through meanders of the soul difficult to define but the film industry hasn’t been very generous with me in this respect. David Reu, however, gave me this opportunity by offering me this role… I made a film, I won a person! The collaboration I had with him wasn’t from actor to director, but from person to person. David Reu wasn’t content with just «casting» an actor; he embarked on a mission of psychological scouting, he did everything in order to have the most complete picture of the personality of the actor he was assigning this character, meaning a human being. And Onu is not just any character, but rather he has the destiny of someone defeated by the consciousness of the great error, of great misunderstandings and by deep silences which separate him forever from the rest. I love this film and I hope that the «magic circle» of cinema will not enclose for me with this film, but on the contrary!” (Constantin Codrescu, Film brochure)

Producer’s opinion
“The recent history of our cinema has proven that the outstanding action and suspense film directors come from among the documentary filmmakers working at “AlexadruSahia” Studio and I think that The Magic Circle by David Reu confirms this.” (Corneliu Leu, Film brochure)

Composer’s opinion
“Thanks to a fortunate collaboration with the director I think I’ve accomplished what any composer must probably want, that his music become an active piece in the narrative substance of the film.” (Paul Urmuzescu, Film brochure)

Writer’s opinion
“Cinema is a school of precision, often a painful one. The author would have well liked to see many more other scenes flicker on the magical white rectangle in order to provide psychological justification for his heroes or to confer logic to their actions. But he had to give in, to give in with each step… and all the more so since he had to add new facts and attitudes by comparison with the literary version of the story. [These new elements] were meant to highlight with even more poignancy the profoundly humanist dimension of the practice of justice there is to be found in Socialist Romania. Therefore, a school of surrendering. But this doesn’t stop him from believing that the cinema career of his hero, MirceaVigu from the judiciary Miliţia, has only just started!” (Nicolae Mărgeanu, Film brochure) 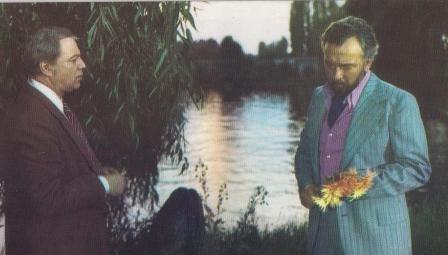