“In film she brings that delicate flutter of the gracious feminity, of the unsophisticated spirituality, that touch of poetry, even sad and implausible, that the life (and the film as well!) needs in order to be able to fight the life`s strains and the films` conventions.” (Sanda Faur, Almanah Cinema 1975).
“Intellectualism and refinement, an air of extraordinary class (maybe sometimes too sophisticated and pretentious I add, with great admiration for the actress` effort, sometimes Sisyphean, of always trying to be above the average), intelligence and cold, sharp expressivity, a special femininity, somewhat manly in a way (no matter how crazy this idea might sound), a rare, a very rare capacity of reaching incandescence acting only from within, a strange charm, a bit frozen (which may confuse some people), an absolutely unique presence, refusing her own myth, but secretly building it with tenacity, an actress of a rare kind, ravishing when she explodes or when she keeps silent (Irina Petrescu`s silent moments are incredible) or when she merely says a word and then, after a short gesture, she looks discreetly right into your eyes.” (Aurel Bădescu, Magazin special Cinema 1978)
“The first day I entered the Bulandra Theatre in 1981, the first person I met at the notice board, with her notepad in her hands, to see the schedule of the rehearsals and performances, was Irina. When you pass by such a panther, at 20 cm, it`s not an easy thing. She was an extremely open person. She was a person who would hug people. She knew exactly who she was, how intelligent she was. But she never suspected anyone around her being less then she was. (…) Having graduated Philology, she spoke Romanian impeccably, which has always been an example for us. She had an inborn technique for the film. A special sense. Very few actors in Romania have such a thing, being natural in front of the camera. (…) She navigated a lot, in a very intelligent, kind, extremely human way in this sea of imponderable elements, effort, metaphors and people. She was conscious she belonged to a great theatre, which put its mark of hands and eyes and mind on her.” (Marcel Iureș)

…truth and lie: “Making a beautiful film for the sake of beautiful doesn`t match the temperament or the sensitivity of these times, which are opened towards the truth in itself, more than towards the beautiful in itself. If the beauty can serve the truth, then I accept it and I salute it. But today I find faking the truth a retrograde thing.” (1972)

...actor: “I`m very much interested in the actor`s status as a social person, because the actor doesn`t live for himself and he needs love, caring and warmth in his relationship with the rest of the world. There is no actor who could be accused of not wanting to do his job. At least this thing should be understood and protected…and I think it is very important to create good working conditions for the film actor, because he is the most precious object among the film props.” (1982)

...audience: “I don`t know if we, the actors, truly know what sitting in a chair for two or four hours breathlessly waiting really means…we go to see our colleagues, we go to see ourselves in a small cinema after the news journal starts, we read the press curiously or with indifference and that is about where our capacity of consuming something that we worked on or others worked on for a few months ends. It is not true that a quality audience is always the one that appreciates you or the other way around.  And it is not true that the popularity is measured in the number of letters received from the viewers or the number of whispers in the trolley bus: ‘look, it`s…’. The only important thing we should know very well is that, though it should never be disappointed, the audience should not be let impose the easy taste of a phase when it started to understand you and love you. The actor and the director should be allowed to search, to always be different, to be able to bring a tear to the cheeks that were used to laugh and the other way around. But that takes patience, courage and trust. I adore the audience that doesn`t easily ‘make obsessions’, for the flexible one, which is easy to educate and to bring close and I am ready to do anything for it. Because when you are close to such an audience, the actor is safe from the small tricks that he/she could easily use, in order to maintain his/her popularity.”  (Cinema nr. 6, June 1968)

"“After all kinds of teenagers, with or without braids, with the hair loose, barefoot (showed by the cinematographer quite a lot), with or without school bag, here`s a new Irina Petrescu: Anca from Sunday at six. She still plays a teenager (because it seems that everywhere the fate of the actresses under 25 years old is to play teenager characters), but of a different type this time. Of a different vibration. Anca`s diapason vibrates in major and its echos reaches the realm of tragic. And I go back the the directorial eye…Irina Petrescu was also a bit lucky with ​ Pintilie who knew to see her or maybe had the intuition of the yet unexplored territories of her talent. And another eye was there. The one of the cinematographer Sergiu Huzum. Pintilie saw Anca in Irina Petrescu, Huzum made it possible for us to see her as well. He used a raw light – his famous ‘mercury light’ – in that light, the actress` face doesn`t have porcelain smoothness, but looks like that of a real person, porous, with asperities, it breathes with her the torture and the pain, withers and dies along with her. I don`t know if we can tell that Irina Petrescu changed her genre. I would rather say that she fulfilled it for her, that she found it complete, after having shattered it to pieces in The Stranger." (Eva Sîrbu, Festivalul Mamaia '66) 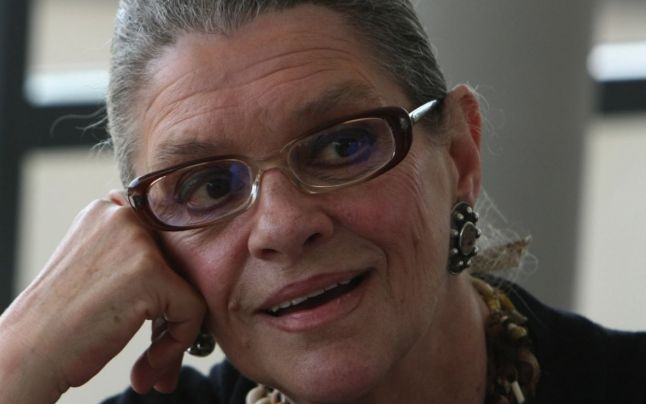